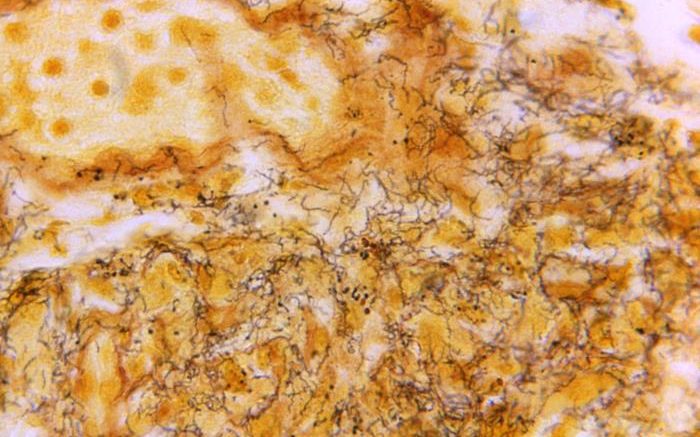 This photomicrograph depicted a tissue sample, which had been prepared using the Steiner silver stain method. The image revealed the presence of numerous, corkscrew-shaped, darkly-stained, Treponema pallidum spirochetes. T. pallidum is the bacterium responsible for causing syphilis. Courtesy of CDC

Two-hundred fifty years ago, more than one-fifth of Londoners had contracted syphilis by their 35th birthday, historians have calculated.

The same study shows that Georgian Londoners were over twice as likely to be treated for the disease as people living in the much smaller city of Chester at the same time (c.1775), and about 25 times more likely than those living in parts of rural Cheshire and north-east Wales.

The study, offers the first robust estimate of the amount of syphilis infection in London's population in the later eighteenth century.

They may not have surprised James Boswell, the celebrated biographer of Samuel Johnson, who recorded up to 19 episodes of venereal disease in his diary between 1760 and 1786. Boswell left a candid record of his many sexual exploits with prostitutes in London in this period, as well as the pain caused by contracting STIs. Today, however, the revelation could help to transform our understanding of the capital's population structure, sexual habits and wider culture as it became the world's largest metropolis.

Szreter said, "It isn't very surprising that London's sexual culture differed from that of rural Britain in this period. But now it's pretty clear that London was in a completely different league to even sizeable provincial cities like Chester."

The researchers are confident that one-fifth represents a reliable minimum estimate, consistent with the rigorously conservative methodological assumptions they made at every stage. They also point out that a far greater number of Londoners would have contracted gonorrhea (or, indeed, chlamydia) than contracted syphilis in this period.

"Our findings suggest that Boswell's London fully deserves its historical reputation," Szreter said. "The city had an astonishingly high incidence of STIs at that time. It no longer seems unreasonable to suggest that a majority of those living in London while young adults in this period contracted an STI at some point in their lives."

"In an age before prophylaxis or effective treatments, here was a fast-growing city with a continuous influx of young adults, many struggling financially. Georgian London was extremely vulnerable to epidemic STI infection rates on this scale."

On experiencing initial signs of discomfort, such as a rash or pain in urination, most people in Georgian England hoped that they only had 'the clap' (gonorrhea) rather than 'the pox' (syphilis), and would have begun by self-medicating with various pills and potions. But for many, the symptoms got worse, leading to debilitating pain and fevers which they couldn't ignore.

Mercury salivation treatment was considered a reliable and permanent cure for syphilis but it was debilitating and required at least five weeks of residential care. This was provided, for free, by London's largest hospitals, at least two specialist hospitals, and many poor law infirmaries, as well as privately for those who could afford it.

To maximize the accuracy of their estimates, Szreter and Siena drew on large quantities of data from hospital admission registers and inspection reports, and other sources to make numerous conservative estimates including for bed occupancy rates and duration of hospital stays. Along the way, they excluded many patients to avoid counting the false positives that arise from syphilis's notoriously tricky diagnosis.

Of particular value to the researchers were surviving admissions registers from the late 1760s through to the 1780s for St Thomas's and Guy's Hospitals which consistently housed 20-30 per cent of their patients in 'foul' wards reserved for residential treatment for the pox. But the researchers also drew on evidence for St Bartholomew's hospital; workhouse infirmaries; and two subscription hospitals, the Lock and the Misericordia, which also cared for 'Foul' men and women.

Patients in London's foul wards often battled their diseases for six months or more before seeking hospitalization. This helped the researchers, making it highly likely that the majority of patients they were counting in the records were suffering from significant protracted symptoms more characteristic of secondary syphilis than of gonorrhea, soft chancre, or chlamydia.

After making careful adjustments, Szreter and Siena reached a final conservative estimate of 2,807 inpatients being treated for pox annually across all institutions c.1775. By dividing this figure by London's population, falling within the catchment area of the hospitals and workhouses studied, they arrived at a crude annual rate of treatment per capita.

By then comparing this with existing data for Chester -- and making further adjustments to account for demographic and social differences between the two cities -- they converted London's crude rate into a comparable cumulative probability rate. This suggested that while about 8% of Chester's population had been infected by age 35, the figure for London was well over 20%.

Why was Georgian London so syphilitic?

A major factor is likely to be the increasing movement of people through London in this period, combined with the financial precarity experienced by young adults aged 15-34. Young women were particularly well represented among new arrivals to the city, and they were often placed in positions of domestic and economic dependence on mostly male employers.

The full 20% chance of infection applies to individuals continuously resident in the capital from age 15 through to age 35. While this applies to most Londoners, among the sizeable mobile minority of the capital's population, who were probably at most risk, some came and went and so spent only part of that most vulnerable period of their lives exposed to this high level of risk.

The historians emphasize that STIs were particularly rife among young, impoverished, mostly unmarried women, either using commercial sex to support themselves financially or in situations that rendered them vulnerable to sexual predation and assault like domestic service. They were also rife among two sets of men: poor in-migrant men, many still unmarried and on the margins of London's economy; and, a range of more established men like James Boswell, who were able to pay for hospital or private treatment.

Szreter said, "Syphilis and other STIs can have a very significant effect on morbidity and mortality and also on fertility. So infection rates represent a serious gap in our historical knowledge, with significant implications for health, for demography and therefore for economic history. We hope that our work will help to change this. Understanding infection rates is also a crucial way to access one of the most private, and therefore historically hidden, of human activities, sexual practices and behaviors."