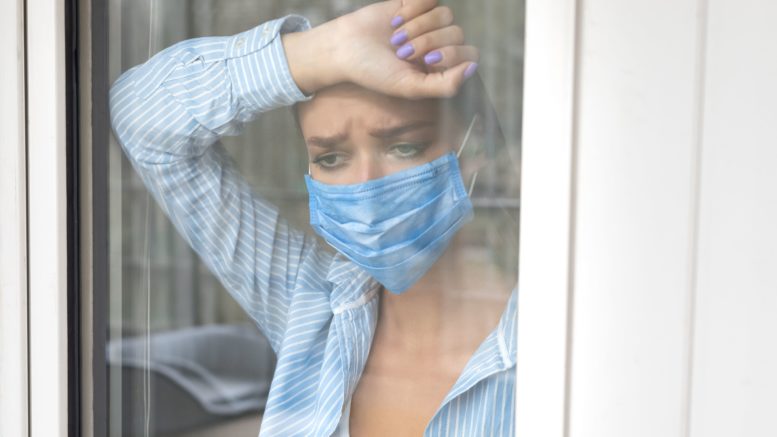 Working with HSU psychology instructor Stephanie Souter, along with support from professor Steve Reicher of University of St. Andrews, Lily Syfers (PhD candidate at University of Alberta) and HSU graduate students James Peabody and Jaz Mendez, Gaffney’s team conducted a number of experiments which analyzed how existential self-uncertainty, brought on by feelings of isolation during the pandemic, may open people up to conspiratorial thinking.

Building on previous research from HSU’s Social Identity Lab, Gaffney studies how group identity functions as a means for understanding the world, and one’s role within it. She explains that self-uncertainty acts as a “negative drive state,” motivating isolated individuals to identify with groups as a means of informing how they should think, feel, and behave.
In the context of the COVID-19 pandemic, Gaffney’s research may help to explain why a minority of Americans continue to resist wearing masks despite their demonstrated effectiveness in slowing the spread of COVID-19.

The data show that affinity for conspiracy groups, which propagate misinformation via YouTube channels and Facebook groups, offer those who are isolated at home something to connect to—and to feel less uncertain about the future.

“People feel like things are beyond their control right now,” says Gaffney. “But we found that connection to social groups buffers the anxiety of the pandemic – group identification tells people how to think and feel and provides a sense of belonging.”

These findings may have particularly important implications as the United States rolls out the first FDA-approved coronavirus vaccinations, with large segments of the American population voicing strong vaccine skepticism.

Another line Gaffney and her colleagues’ research shows that critical responses to President Trump’s handling of the pandemic has an effect on compliance to COVID-19 protocols. Partisanship played a significant role in individual behaviors such as resisting orders to shelter-in-place, wearing masks, and practicing social distancing.

“When Republicans read a criticism of the current President, which they believed to come from a Democratic source, it actually increased their support for Trump, and decreased their likeliness to wear a mask,” says Souter.

She explains that the same result did not occur when Republicans believed the source was another Republican, a classic example in-group and out-group identity formation along partisan lines.

Gaffney attributes this to the way that groups can provide clarity for individuals and people actively attempt to protect their leaders as extensions of themselves and their groups.

The study illustrates the important role that leaders set in shaping normative behavior, and how polarization can drive individuals to reject behaviors which they associate with the “other.” At its crux, the psychologists found that a critical response of one’s leader is characterized as an attack on the entire group.

The analysis of Republicans’ increased support of the outgoing President in response to criticism from Democrats (the outgroup) is consistent with intergroup relations patterns with other world leaders. For example, Gaffney and her colleagues found that Liberal Canadians increased their support for Prime Minister Trudeau after they read an outgroup Conservative member’s critical response to Trudeau appearing in a racist photo pattern did not emerge when he was criticized by an ingroup Liberal. In both cases, their data illustrates that if the source of the criticism is from an outgroup, it actually strengthened support for the ingroup’s leader.

Gaffney’s team will conduct more experiments in the coming months to test their findings across varied demographics, including among social groups that typically skew toward extreme liberal and conservative politics–the anti-vaccination movement is a prime example.