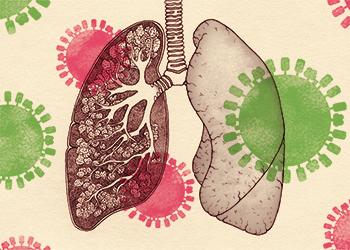 The seasonal flu kills up to 600,000 people a year worldwide and has a century-long history of pandemics. Examples include the Spanish flu in the late 1910s or the H1N1 in 2009, which together claimed more than 50 million lives.

"The way the stage is set tells us that it is not a matter of if but rather of when there will be a next pandemic. And preparing ourselves for that demands intensive fundamental research and constant accumulation of knowledge about these viruses and the diseases they cause," says Maria João Amorim, IGC principal investigator and leader of the team that conducted the study.

When a virus like influenza enters our lungs, it is quickly faced with cocktails of molecules that recognize it and alert the host of its presence. Signals flow back and activate the immune response, calling in an army of cells and inflammation sidekicks. Any exaggeration can destabilize the equilibrium needed to clear the virus and spare our tissues from damage. For most people, clearance arrives a few days after infection and leaves very few traces. But for some, influenza infection entails severe complications, resulting from an exacerbated response that damages the lungs.

"We found that DAF, which stands for decay accelerating factor, aggravates influenza A infection and increases damage to the lungs in mice. This virulence mechanism of influenza, and the molecular regulation that underpins it, are new for us," Amorim says.

DAF is a receptor found at the surface of most cells that functions to protect them from being attacked by one of our own immune surveillance systems--the complement. This system protects us against invading pathogens once it detects them in circulation, by inactivating the pathogen itself, or inside infected cells, by mounting a strategy to eliminate them.

"But this can work as double-edged sword because if complement destroys cells from the host, there is the associated danger of provoking excessive self-injury by eliminating too many bystander cells and promoting inflammation. In fact, disease severity and mortality have been associated with both lack or excess of complement activation, which is tuned by regulators such as DAF," remarks Nuno Santos, first author of the study.

Contrary to expectations, the team found that influenza A virus exploits DAF to potentiate complement activation as an immune evasion mechanism, increasing the recruitment of immune cells.

"By doing so, it can exacerbate the immune response, and this is what damages the lungs. Remarkably, this occurs in a way that is independent of viral load, telling us that it directly affects resilience to infection," says Zoé Vaz da Silva, coauthor of the study.

The role of DAF upon influenza infection can depend on how it interacts with some parts of the virus, leading to more or less aggravated responses. "The complement system is important, but not the only component that determines the outcome of the infection. These interactions have functional implications and are an unprecedented way of a virus, via altering a host protein from within the infected cell, to modulate the immune response. Studying this further in the future is crucial," Amorim says.

This work highlights a novel immune evasion strategy by influenza A virus and stresses the importance of a balanced immune response to viral infections, which allows disease clearance without causing damage. Despite its intrinsic protective role, the immune system can be the cause of severe complications during influenza A infection.

This work was developed at Instituto Gulbenkian de Ciência, in collaboration with Celso Reis from the I3S. Funding was granted by Fundação para a Ciência e a Tecnologia and Fundação Calouste Gulbenkian.