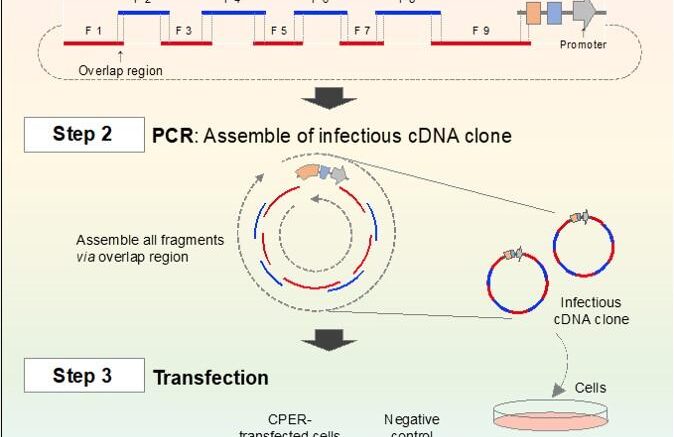 A total of nine gene fragments covering the full-length SARS-Cov-2 genome and a linker fragment were amplified. Because all the fragments were designed to include ends that overlapped with the adjacent fragments, they could be assembled as a circular viral genome by an additional PCR step. Recombinant SARS-CoV-2 was rescued by transfection of the circular viral genome into susceptible cells. Cytopathic effects were only observed in cells transfected with CPER products. Courtesy of Osaka University

Scientists know that mutations in the genome of SARS-CoV-2 have occurred and spread, but what effect do those mutations have? Current methods for studying mutations in the SARS-CoV-2 genome are very complicated and time-consuming because coronaviruses have large genomes, but now a team from Osaka University and Hokkaido University have developed a quick, PCR-based reverse genetics system for analyzing SARS-CoV-2 mutations.

This system uses the polymerase chain reaction (PCR) and a circular polymerase extension reaction (CPER) to reconstruct the full-length cDNA of viral genome. This process does not involve the use of bacteria, which can introduce further unwanted mutations, and takes only two weeks using simple steps to generate infectious virus particles. Previous methods took a couple of months and were very complicated procedures.

"This method allows us to quickly examine the biological features of mutations in the SARS-CoV-2," says lead author of the study Shiho Torii. "We can use the CPER technique to create recombinant viruses with each mutation and examine their biological features in comparison with the parental virus." The large circular genome of SARS-CoV-2 can be constructed from smaller DNA fragments that can then be made into a viable viral genome with CPER, and used to infect suitable host cells. A large amount of infectious virus particles can be recovered nine days later.

"We believe that our CPER method will contribute to the understanding of the mechanisms underlying propagation and pathogenesis of SARS-CoV-2, as well as help determine the biological significance of emerging mutations," explains corresponding author Yoshiharu Matsuura. "This could accelerate the development of novel therapeutics and preventative measures for COVID-19." The team also suggest that the use of the CPER method will allow researchers to insert "reporter genes" into the SARS-CoV-2 genome to "tag" genes or proteins of interest. This will enable a greater understanding of how SARS-CoV-2 infects cells and causes COVID-19, assisting with the development of therapies. The CPER method could even allow a recombinant virus that is unable to cause disease to be generated, which could be used as a safe and effective vaccine for SARS-CoV-2.

Mutations are arising in the SARS-CoV-2 population all the time, as well as questions as to what those mutations do and whether they could affect the efficacy of vaccines. "Our simple and rapid method allows scientists around the globe to characterize the mutants, which is a vital step forward in our fight against the SARS-CoV-2," says Takasuke Fukuhara of the research group.

The article, "Establishment of a reverse genetics system for SARS-CoV-2 using circular polymerase extension reaction," was published in Cell Reports at DOI: https://doi.org/10.2139/ssrn.3714847

1 Comment on "A Novel, Quick and Easy System for Genetic Analysis of SARS-CoV-2"