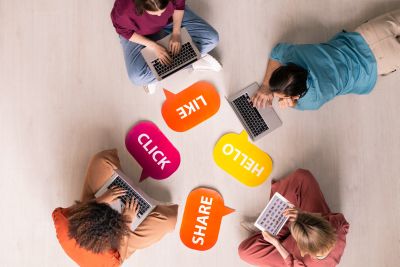 Public attitude toward COVID-19 and its treatments is more "infectious" than the disease itself, according to a new Northwestern Medicine study using Artificial Intelligence (AI) to analyze tweets about the virus. Researchers studied the influence of Twitter on COVID-19 health beliefs as well as the competing influence of scientific evidence versus the speeches of politicians.

"In the pandemic, social media has contributed to much of the information and misinformation and bias of the public's attitude toward the disease, treatment and policy," said corresponding study author Yuan Luo, chief artificial intelligence officer at the Institute for Augmented Intelligence in Medicine at Northwestern University Feinberg School of Medicine.

"Our study helps people to realize and re-think the personal decisions that they make when facing the pandemic," Luo said. "The study sends an 'alert' to the audience that the information they encounter daily might be right or wrong, and guide them to pick the information endorsed by solid scientific evidence. We also wanted to provide useful insight for scientists or health care providers, so that they can more effectively broadcast their voice to targeted audiences."

The study was published recently in the Journal of Medical Internet Research.

How can scientists counter inaccurate information from politicians?

"Politicians may talk inaccurately about a certain treatment's effectiveness or say that COVID-19 is no big deal; it's just like the flu," said Luo said, also chief AI officer at Northwestern University Clinical and Translational Sciences Institute. "These comments have as strong effect as real scientific evidence and drive people's beliefs. This is what we are concerned about."

By understanding how the public's attitudes are affected, scientists can take actions to make sure scientific fact and evidence have a loud enough voice.

"As a scientist, you need to be aware that you need to get the science out to people. If you don't put energy into this, your efforts can be easily offset by those who talk irresponsibly," Luo said. "Going forward, we may want to pay more attention to a public information campaign to educate people about the vaccine in order to maximize the inoculation impact."

How are people's attitudes toward COVID-19 influenced by tweets?

"As a lay person, you should become aware of what you retweet and do a fact check first," Luo said. "And be aware anything you see on Twitter is shaping your attitude. You need to become aware of this before you let others' tweets and opinions shape yours and you become part of that megaphone."

"A lot of people aren't aware of how much their beliefs are impacted by tweets, and don't bother to fact check what they read and retweet. When the information is biased, they ignore or did not notice it. It's like a viral marketing effect. It's just about catching eyeballs on a trending topic, but it affects everyone on social media."

How is this study novel?

The study is novel because it integrates machine learning algorithms and classic epidemiology models to retrospectively investigate the contents on social media and its effects, Luo said.

The study also allows other researchers to "look under the hood" to understand how this AI algorithm works.

"We identified the fluctuating trends of public attitudes from the tweets, then aligned the important scientific and non-scientific events that are associated with these trends," Luo said. "As a result, we are offering insights people can take action on."

How many tweets did the AI analyze?

Luo's team, led by the study's first author Hanyin Wang, a PhD student in the Driskill Graduate Program, retrospectively collected COVID-19-related tweets using the Twitter API. In total, they retrieved 92,687,660 tweets corresponding to 8,967,986 users from January 6 to June 21, 2020. To train the AI model, they randomly selected 5,000 of the tweets for annotation. Each tweet was doubly reviewed to decide if it met any of the four core constructs of the health belief model, perceived susceptibility, perceived severity, perceived benefits and perceived barriers.

Luo's team is currently integrating machine learning and deep learning in the study of how social media can affect the general public's attitude toward COVID-19 vaccines. The goal is to identify specific public concerns and inform targeted vaccination campaigns to maximize inoculation impact. They are also looking at using social media data as a way to detect gender or race disparities in and out of the pandemic.

The study was funded in part by grant R01LM013337 from the National Library of Medicine of the National Institutes of Health.