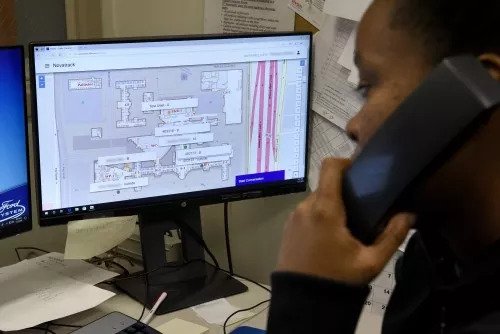 The ability to track mobility services like patient transport and housekeeping (cleaning hospital rooms between patients) in real-time allows hospitals to look for opportunities to improve routine tasks, routes and their coordination. Courtesy of Henry Ford Health System

A new indoor software tracking system conceived at the Henry Ford Innovations (HFI) in Detroit for use in hospitals is being compared to GPS for its functionality.

The two developers behind the system called Novatrack say it has the potential to be a “game changer” in health care for its capability and precision to optimize operations and improve efficiencies.

Since its inception in 2011, HFI, the innovations arm of Henry Ford Health System, has signed 30 licensing agreements representing $350 million in future revenue.

“This is a win-win-win situation,” Joseph Jankowski, PhD, an HFI senior advisor, says of Novatrack. “It saves time because it makes better use of hospital resources, but it also improves the overall patient experience. Staff are more efficient in their work and patient transports and discharges are better managed, which creates a much better working environment for everybody involved in the care process.”

Novatrack is believed to be a first-of-its-kind software for coordinating indoor hospital logistics. It’s based on the hospital’s floor print and uses the hospital’s wireless network and Apple’s indoor positioning system to provide real-time visualization and location of staff who carry iPhones equipped with the Novatrack app. Managers monitor the staff’s location from a traffic-control center and communicate with them via text messaging. For privacy and security reasons, neither patients nor patient information is part of Novatrack.

Novatrack is the brainchild of two Henry Ford Health team members Paul Zieske, program manager of location services in Information Technology, and Daniel Siegal, MD, vice chair of the Department of Radiology. Zieske introduced the concept as one of the fellows in the 2014-15 inaugural class of HFI’s Davidson Fellowship program, which provides training and education for developing and commercializing digital technologies. It’s also where Zieske and Siegel teamed up, and the concept gained traction from there.

“Everybody has an idea of something they want to build when they come into the program,” Zieske says. “I knew the tracking system was something we needed to do.”

After completing the fellowship, Zieske and Siegal built a protype and, with the backing of hospital leadership, began testing it in October 2018 with patient transport and housekeeping services at Henry Ford Hospital, the health system’s flagship hospital. It is now being expanded for use in inpatient pharmacy and soon in inpatient food delivery services. In 2020, the software is also planned for use at Henry Ford’s other four acute-care hospitals in Clinton Township, Jackson, West Bloomfield and Wyandotte.

“The concept we’re using to describe this is traffic control for health care,” says Zieske, who early in his career worked for the Federal Aviation Administration and was part of the team that installed radar systems at the Detroit Metro Airport. “It shows the very precise location of workers and a little call-out with their name on the screen and the floor that they’re on.”

Siegal says Novatrack could be a “game changer” in health care because of its process improvement capability.

“Think about GPS on your phone outdoors. Now you have the ability to do that indoors (with Novatrack),” he says. “This is a tool to help end users be more efficient.”

The ability to track mobility services like patient transport and housekeeping (cleaning hospital rooms between patients) in real-time allows hospitals to look for opportunities to improve routine tasks, routes and their coordination, Dr. Siegal says.

“I think in 10 years, you’ll be behind the curve if you don’t have some kind of location-based tool in your health care system. Probably even five years,” Siegal says.

Both Zieske and Siegal emphasized that Novatrack is not for monitoring staff’s whereabouts in a Big Brother way. “We’ve been very open about it with staff,” Zieske says. “The reason we are tracking them is we want to improve safety and efficiency.”

For the health conscious, though, Novatrack can measure your walking distance on a shift. “I once showed a transporter how far he walked inside the building,” Zieske says. “You should have seen his face light up. He was like, ‘wow, I walked 5.5 miles today.’”