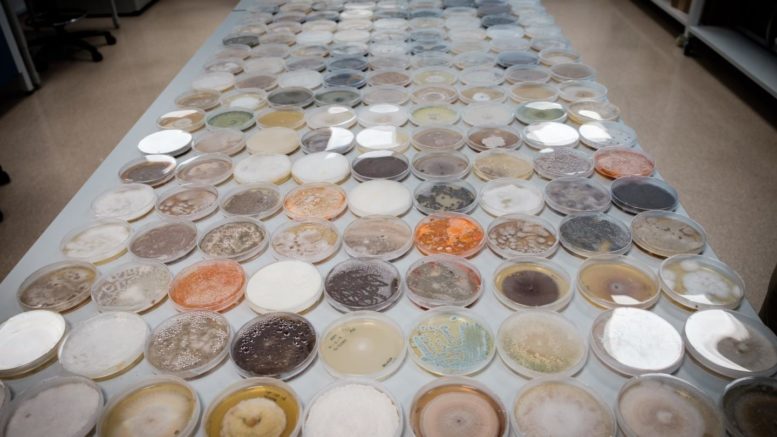 More than 300 species of microorganisms from tropical air have their genomes completely sequenced, with over 1,200 microorganisms identified since. Sequencing microorganisms allows scientists to know what these organisms are and what they do, which could lead to new drugs and antibiotics in future. Courtesy of NTU Singapore

Scientists from the Singapore Centre for Environmental Life Sciences Engineering (SCELSE) at Nanyang Technological University, Singapore (NTU Singapore) have found that the air in the tropics is teeming with a rich and diverse range of at least 725 different microorganisms.

The NTU scientists used a new sampling and DNA sequencing protocol of microbial communities in Singapore's air. They found that the composition of the microbial community in the tropical air changes predictably, with bacteria dominating in the day and fungi at night.

This day-night pattern and the diversity of airborne microorganisms in the near-surface atmosphere was previously unknown, as the atmosphere is technologically challenging to study, making it the most underexplored ecosystem on a planetary scale, compared to land and sea ecosystems.

The new knowledge on tropical bioaerosols - tiny airborne particles comprising fungi, bacteria and plant material - is reported this week in the Proceedings of the National Academy of Sciences.

In the research paper led by NTU genomics professor Stephan Schuster, the team reported that tropical air had a microbial diversity with similar complexity to other well-studied ecosystems, such as seawater, soil, and the human gut.

These bioaerosol communities (airborne particles of biological origin) have an unexpectedly high number of bacterial and fungal species, and they follow a diel cycle (a 24-hour day and night cycle) which scientists believe is driven by environmental conditions such as humidity, rain, solar irradiance and carbon dioxide levels.

They also demonstrate a greater variation in composition within a day than between days or even months. This robust community structure maintains long-term predictability, despite variations in airflow and monsoonal winds across the tropical seasons.

Schuster, who is a research director at SCELSE, said having the ability to analyse bioaerosols provides insights into many aspects of urban life that affect our daily living and human well-being. It also provides an understanding of the interactions between atmospheric, terrestrial and aquatic planetary ecosystems, which is particularly valuable during climate change.

"Our current study suggests that temperature is also a global driver of microbial community dynamics for the atmosphere near the surface. Such understanding is fundamental to ensuring ecosystem sustainability in urban settings and beyond," Schuster added. "Locally, understanding bioaerosol dynamics will also inform the way we are managing our surrounding atmosphere, such as the effect of indoor air quality, mechanical ventilation and pollution on the air microbiomes that surround us. Further, our study provides important and much-needed insights into bioaerosols in a tropical setting, given that existing studies have exclusively involved temperate climates."

On average, humans breathe in 11 cubic meters of air daily (11 thousand liters), which could contain some 50,000 organism cells in the tropics during the day time, but 30 to 100 times that amount at night.

The scientists say they are beginning to understand the effect of air microbial communities on the environment and human health, with the most immediate impact on patients with respiratory illnesses. Further, damage to agricultural crops could be avoided long term, as many of the detected organisms are plant pathogens or wood rotting fungi.

The findings have led the research team to initiate an ongoing interdisciplinary research project between SCELSE and NTU's Lee Kong Chian School of Medicine in the area of respiratory health.

The research team set up a series of air sample collectors on a rooftop at the NTU campus, which collected samples every two hours over the course of five days (180 samples per time series). This same experiment was repeated every three months for 13 months, which included Singapore's two monsoon seasons.

Airborne biomass was collected by pumping air through an electrostatic filter retaining particles from 0.5 to 10 micrometre range (about 50 times to 10 times smaller than the average thickness of a human hair respectively). Previously, air samples had to aggregate for weeks or months in order to amass sufficient material for analysis.

Through the new ultra-low biomass DNA sequencing protocol developed by the NTU research team, much smaller volumes of air could be analysed, enabling for the first time the ability to study hourly changes in the air microbiome composition.

All bioaerosols were classified according to their DNA similarities and differences, which allowed for species-level identification of airborne organisms after comparison with existing DNA sequence databases.

The researchers surpassed the level of identification of bioaerosols previously achieved by scientists, without the need to amplify DNA or using long-term sampling periods that do not provide sufficiently detailed information at short time intervals.

Previous studies by other research groups have reported bioaerosol communities based on either cultivation or gene amplification, both of which incur substantial biases and aggregates of time, without however achieving a temporal resolution that would have allowed for observing the daily cycling of airborne microorganisms.

Team member Dr. Elena Gusareva, a postdoctoral research fellow at NTU said the unprecedented scale and depth of analysis and classification, allowed the team to identify more than 1,200 bacterial and fungal species that perform a changing pattern of microbial community composition.

Ongoing research at NTU is now looking at using the same method to analyse bioaerosols globally at other sites, which could yield similar trends in terms of following the diel cycle.

The paper titled "Microbial communities in the tropical air ecosystem follow a precise diel cycle," was published in PNAS on Oct 29, 2019.