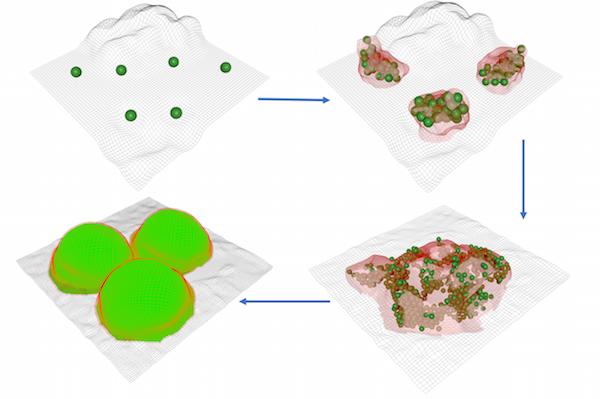 Microbiologists have long adopted the language of human settlement to describe how bacteria live and grow: They "invade" and "colonize." Relations dwelling in close proximity are "colonies."

By pairing super-resolution imaging technology with a computational algorithm, a new study in Nature Communications confirms that this metaphor is more apt than scientists may have realized. The findings show that, as individual bacteria multiply and grow into a dense and sticky biofilm, such as the community that forms dental plaque, their growth patterns and dynamics mirror those seen in the growth of cities.

"We take this 'satellite-level' view, following hundreds of bacteria distributed on a surface from their initial colonization to biofilm formation," says Hyun (Michel) Koo, a professor in Penn's School of Dental Medicine and senior author on the work. "And what we see is that, remarkably, the spatial and structural features of their growth are analogous to what we see in urbanization."

This new perspective on how biofilms grow could help inform efforts to either promote the growth of beneficial microbes or break up and kill undesirable biofilms with therapeutics.

The idea for the research emerged from conversations among Koo; Geelsu Hwang, a Penn Dental Medicine assistant professor who applies engineering to problems of oral health; and Amauri Paula, a physicist who worked as a visiting professor with Koo's lab.

"Usually when people study biofilms, they analyze a single cell in a narrow field of view as it multiplies, becomes a cluster, and starts to build up," says Koo. "But we wondered if we followed multiple individual cells simultaneously whether we could identify some patterns at large length-scales."

Hwang developed powerful time-lapse imaging tools, employing confocal laser scanning microscopy capable of analyzing surface topography and tracking bacteria populating a surface down to the individual cell in three dimensions over time. Meanwhile, Paula worked to build an algorithm that could analyze the behavior of this growth over time.

For their study, they used the microbe Streptococcus mutans, an oral pathogen responsible for causing cavities when it forms a the biofilm known more commonly as dental plaque and releases acids that decay tooth enamel.

They distributed the bacteria on a tooth enamel-like material and followed hundreds of individual microbes during several hours as they divided and grew.

Overall, the growth patterns were reminiscent of the formation of urban areas, the team found. Some individual "settlers" grew, expanding into small bacteria "villages." Then, as the boundaries of the villages grew and, in some cases met, they joined to form larger villages and eventually "cities." Some of these cities then merged to form larger "megacities."

Surprising the researchers, their results showed that only a subset of the bacteria grew. "We thought that the majority of the individual bacteria would end up growing," says Koo. "But the actual number was less than 40%, with the rest either dying off or being engulfed by the growth of other microcolonies."

They also didn't expect a lack of inhibition when this engulfment took place. They thought that, as different microcolonies met, they might compete with one another, causing the two edges to perhaps repel.

"Instead they merge and begin to grow as a single unit," says Koo.

On both the individual bacteria and biofilm-wide scale, the researchers confirmed that the gluelike secretion known as extracellular polymeric substances (EPS) enabled bacteria to pack together closely and firmly in the biofilm. When they introduced an enzyme that digested EPS, the communities dissolved and returned to a collection of individual bacteria.

"Without EPS, they lose the ability to densely pack and form these 'cities,'" says Koo.

Finally, the researchers experimented to see how the addition of a microbial "friend" or "foe" would influence the original bacteria's growth. The "foe" was Streptococcus oralis, a bacteria that can inhibit the growth of S. mutans. This addition dramatically impaired the ability of S. mutans to form larger "cities," like disruptive neighbors that can affect the collective growth of the community.

The "friend"--the fungus Candida albicans, which Koo and others have found to interact with S. mutans in biofilms and to contribute to tooth decay--did not affect the biofilm's growth rate but did help bridge adjacent microcolonies, enabling the development of larger "cities."

Koo cautions about taking the urbanization metaphor of biofilm growth too far but underscores the useful lessons that can result from studying the system holistically and by looking at the events under both "close-up" and "bird's eye" views.

"It's a useful analogy, but it should be taken with a grain of salt," Koo says. "We're not saying these bacteria are anthropomorphic. But taking this perspective of biofilm growth gives us a multiscale, multidimensional picture of how they grow that we've not seen before."

Hyun (Michel) Koo is a professor in the Department of Orthodontics at the University of Pennsylvania School of Dental Medicine.

Geelsu Hwang is an assistant professor in the Department of Preventive and Restorative Sciences at the University of Pennsylvania School of Dental Medicine.

Amauri J. Paula is an assistant professor in the Department of Physics at the Universidade Federal do Ceará in Brazil. He was a visiting professor at the University of Pennsylvania School of Dental Medicine.