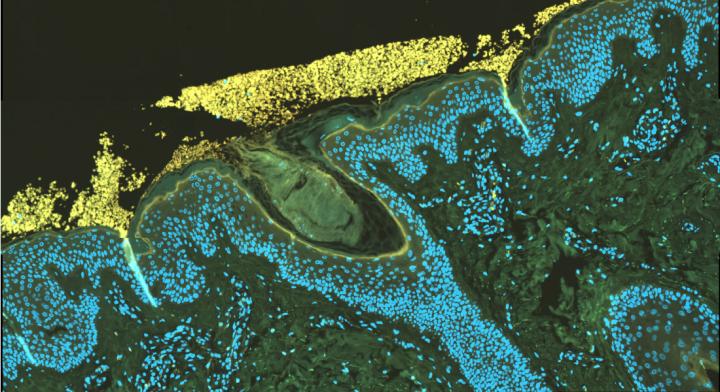 A cross-section of human skin. Courtesy of Lene Bay, the Faculty of Health and Medical Sciences, University of Copenhagen.

In the dermis skin layer, the same bacteria are found across age and gender. This has been shown by researchers from the University of Copenhagen in a new study which has studied skin samples from knees and hips. The researchers hope it is a step in the direction of a better understanding of why skin disorders occur.

The bacterial microbiome on the skin has been compared to a fingerprint: Unique to each person. This does indeed apply to the epidermis, the outer layer of skin. But further down, in the layer of skin called dermis, we are all alike and have the same bacteria.

This is shown by researchers from the University of Copenhagen in a new study, published in the scientific journal mBio.

The researchers have studied skin samples from knees and hips. They have received the samples from Danish patients who were to have knee surgery. All the operations were so-called primary operations, that is, the patients did not have an infection on beforehand and were healthy.

The results have an impact on our understanding of the skin and its bacteria. According to the researchers, this knowledge is important if we are to become better at treating skin disorders such as childhood eczema and psoriasis and understand why they occur.

"It is important that we drop the assumption that we are all different, and that the microbiome of the skin does not matter very much. We do know that bacteria play a major role in skin disorders. Therefore, we need to understand the bacteria and the skin in its three dimensions," says co-author Thomas Bjarnsholt, a professor at the Department of Immunology and Microbiology, University of Copenhagen.

"Especially in connection with skin disorders, you see that the healthy skin balance disappears and that there is a build-up of some dominant bacterial species. Hopefully, this knowledge will help us to understand for example how eczema occurs and which irregularities are taking place in the skin," says Bjarnsholt.

The understanding of the dermis microbiome may also be important to understand how, for example, acute wounds, infections and surgical wounds occur. There is always a risk of infection in connection with surgery. For knee and hip surgery, the risk is one to two percent.

"It is not a huge problem, but there are many knee and hip operations on a yearly basis, and we will see more and more in the future. That is why it will represent a growing problem. We believe that the dermis' microbiome has a bearing on the risk of infection after surgery," says Bay.

"When you cut through the skin during surgery, you may be pushing some of these bacteria even further down. And the underlying bacteria are not cleansed with surgical ethanol like the bacteria on epidermis. Which significance that may have and whether it may be the cause of post-surgery infections is one of the things that we need to study more closely," Bay adds.