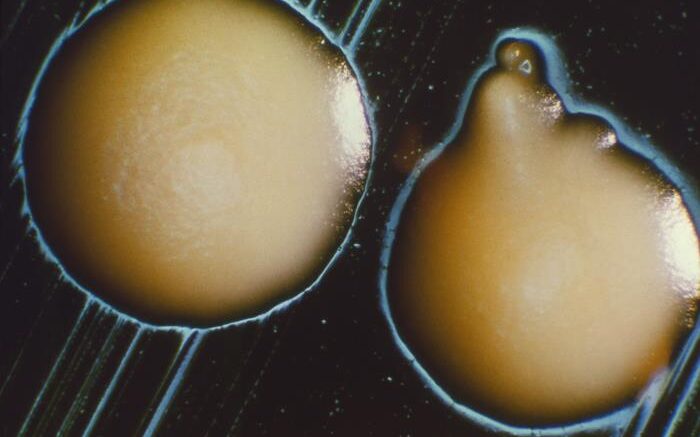 Under a magnification of 30X, this image depicted a close view of two Candida albicans fungal colonies. Courtesy of CDC/Dr. Hardin

The microbes that make us sick often have ways to evade our attacks against them. Perhaps chief among these strategies is a sticky, armor-like goo, called the biofilm matrix, that encases clusters of disease-causing organisms.

This defense works, sometimes in tragic ways. For example, biofilms form readily and invisibly on medical devices like catheters and implants and are highly resistant to drugs that might otherwise treat them. The infections they cause cost tens of thousands of lives and billions of dollars a year in the U.S.

“There are no approved antimicrobials to treat biofilms. The only way to treat a biofilm is to physically remove it from the body,” says David Andes, a professor of medicine at the University of Wisconsin School of Medicine and Public Health.

In a new study designed to better understand and combat these structures, Andes and his collaborators identified some of the key proteins in biofilms of the fungus Candida albicans that control both how they resist antifungal drugs and how they become dispersed throughout the body.

While more work is necessary, the newly identified proteins provide potential drug targets to impair a pathogen’s antimicrobial defenses. In fact, the study found that Candida that could not make some of these proteins were much more sensitive to the existing antifungal fluconazole.

However, interfering with some of these same proteins made the biofilms more likely to spread to the kidney in a rat model of infection. This is a shortcoming that further research will need to address.

Andes and his team, which included University of Georgia professor of biology Aaron Mitchell, published their findings Oct. 29 in the journal Nature Communications.

Candida is an enigmatic organism. The fungus often makes its home in and on healthy people, to no ill effect. But it can readily infect immunocompromised individuals, even those who are otherwise well.

Biofilms are made up of a complex soup of materials secreted by individual cells within them, including proteins. The researchers used a machine-learning algorithm to screen through hundreds of these proteins to identify likely candidates involved in biofilm production and function. They identified 63 proteins to investigate further.

When the researchers created Candida mutants unable to make these proteins, 13 of them became more susceptible to the antifungal fluconazole in lab tests.

The Andes lab, which specializes in developing animal models to test drug resistance, also investigated the proteins in a rat model involving venous catheters. These catheters, inserted into large veins, are often left in place for months to help deliver drugs, such as during chemotherapy treatment. Because they spend a long time in the body, catheters are prone to becoming sources of infection.

When the researchers tested four of the 13 drug-sensitive fungal mutants in the rat model, all four remained susceptible to fluconazole like earlier lab tests had demonstrated. While the antifungal barely affects normal Candida biofilms, it cut mutant fungal populations down by 30-fold or more.

Biofilms don’t just drive drug resistance. They affect the entire lifecycle of a pathogen. “The last step in the lifecycle of a biofilm is dispersion. Cells leave the biofilm and spread to other parts of the body,” says Andes. This body-wide dispersal greatly increases the risk from infections.

The researchers found 17 mutants that affected this dispersion process; most of them dispersed more readily. Tested in rats, three of these high-dispersal mutants led to a more than 10-fold increase in the spread of Candida to the kidneys.

Intriguingly, two of the mutants were both more susceptible to antifungals and more likely to disperse to the kidney, a mix of positive and negative clinical outcomes. Andes says this overlap of function — partly antimicrobial, partly controlling dispersal — suggests the proteins play complex roles in biofilms.

The Andes lab has already identified a drug that can interfere with the fungus’s defense. They recently found that the antifungal turbinmicin — which Andes and his collaborators discovered in 2020 — can block Candida’s ability to secrete these proteins and other components of biofilms, making the pathogen more susceptible to drugs.