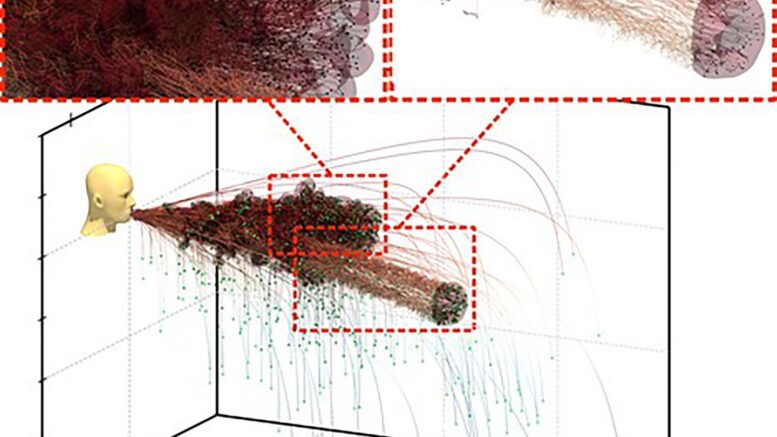 The chaotic nature of turbulence can substantially extend the reach of viral particles from a cough. Courtesy of Jorge Salinas

Computer simulations have been used with great success in recent months to visualize the spread of the COVID-19 virus in a variety of situations. In Physics of Fluids, by AIP Publishing, researchers explain how turbulence in the air can create surprising and counterintuitive behavior of exhaled droplets, potentially laden with virus.

Investigators from the University of Florida and Lebanese American University carried out detailed computer simulations to test a mathematical theory they developed previously. They found nearly identical exhalations could spread in different directions when miniscule initial variations are substantially amplified by turbulence. This is the so-called butterfly effect.

The investigators call the volume of exhaled air in one cough or sneeze a puff. They found most liquid droplets that could potentially contain virus remain within the puff as it spreads. However, a small number of droplets are ejected from the puff at near-ballistic speeds, vastly overshooting the major portion of the exhaled air.

The droplets shooting out of the puff like bullets are larger than the norm, while those that remain within the puff are smaller. Additionally, the authors found the portion of the puff advancing at a higher speed would drag a few droplets with it. This turbulence-induced mechanism provides an explanation for why ejected droplets sometimes go so far from the source.

"One of our interesting findings was that a small portion of the puff of air could detach," author Nadim Zgheib said. "The detached portion resembles a vortex ring-like structure and advances at relatively quickly along a direction that deviates slightly from the flow direction."

The peeled-off portions are ring shaped, allowing the separated pockets of air to advance at higher speed, potentially spreading dangerous virus-laden droplets over a large area.

"We noticed that the center of the separated puff is practically void of any droplets," said author Jorge Salinas.

The direction this detached portion travels cannot be predicted. Multiple runs revealed detached pockets of virus-laden air could travel in many directions, reaching large distances from the potentially infected person.

While droplets are dragged along by the peeled-off pocket of air, others remain stranded within the main body of the puff. The density of these droplets is considerably higher than the surrounding air, so they tend to settle out under gravity and eventually land on the ground or surfaces below.

The article, "Investigation of theoretical scaling laws using large eddy simulations for airborne spreading of viral contagion from sneezing and coughing," is authored by Kai Liu, Majid Allahyari, Jorge S. Salinas, Nadim Zgheib, and S. Balachandar. The article will appear in Physics of Fluids on June 29, 2021 at https://aip.scitation.org/doi/10.1063/5.0054651.