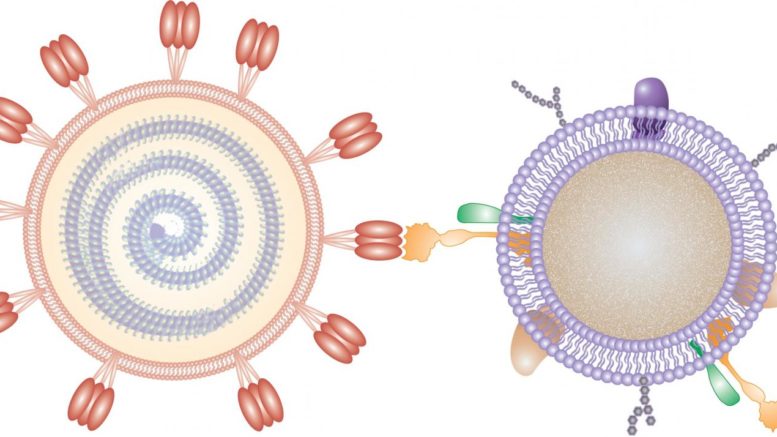 In this illustration, a nanosponge coated with a human cell membrane acts as a decoy to prevent a virus from entering cells. Adapted from Nano Letters 2020, DOI: 10.1021/acs.nanolett.0c02278

Scientists are working overtime to find an effective treatment for COVID-19, the illness caused by the new coronavirus, SARS-CoV-2. Many of these efforts target a specific part of the virus, such as the spike protein. Now, researchers reporting in Nano Letters have taken a different approach, using nanosponges coated with human cell membranes -- the natural targets of the virus -- to soak up SARS-CoV-2 and keep it from infecting cells in a petri dish.

To gain entry, SARS-CoV-2 uses its spike protein to bind to two known proteins on human cells, called ACE2 and CD147. Blocking these interactions would keep the virus from infecting cells, so many researchers are trying to identify drugs directed against the spike protein. Anthony Griffiths, Liangfang Zhang and colleagues had a different idea: making a nanoparticle decoy with the virus' natural targets, including ACE2 and CD147, to lure SARS-CoV-2 away from cells. And to test this idea, they conducted experiments with the actual SARS-CoV-2 virus in a biosafety level 4 lab.