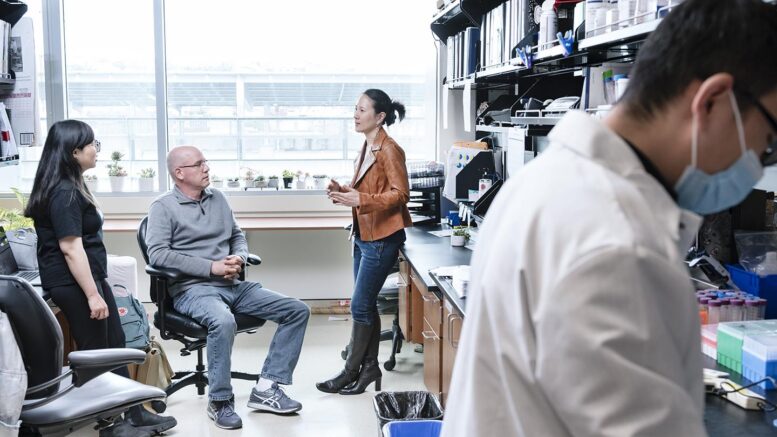 While vaccines are doing a remarkable job of slowing the COVID-19 pandemic, infected people can still die from severe illness and new medications to treat them have been slow to arise. What kills these patients in the end doesn't seem to be the virus itself, but an over-reaction of their immune system that leads to massive inflammation and tissue damage.

By studying a type of immune cells called T cells, a team of Gladstone scientists has uncovered fundamental differences between patients who overcome severe COVID-19 and those who succumb to it. The team, working together with researchers from UC San Francisco and Emory University, also found that dying patients harbor relatively large numbers of T cells able to infiltrate the lung, which may contribute to the extensive lung deterioration that is a hallmark of fatal COVID-19.

The findings, published in the scientific journal Cell Reports, could pave the way for new treatments. Currently, patients who are hospitalized for severe COVID-19 mostly receive dexamethasone, a drug used to reduce inflammation.

"Dexamethasone has been a life saver for many patients," says Gladstone Associate Investigator Nadia Roan, PhD, a senior and corresponding author of the study. "But it is not always sufficient. Our study suggests that it may also be beneficial to directly prevent excess immune cells, including inflammatory T cells, from entering the lung and causing further damage. This approach could be a good complement to anti-inflammatory treatments for COVID-19 patients in the intensive care unit."

The work could also help with disease prognosis.

"Some patients can fall seriously ill from the virus," says Warner Greene, MD, PhD, senior investigator at Gladstone and co-senior author of the study. "We are in dire need for effective ways to anticipate the course of disease, as well as to alleviate lung damage in people with severe COVID-19."

T cells are a crucial component of a successful immune response to many viruses, including SARS-CoV-2, the virus that causes COVID-19. And they are markedly depleted from the blood during severe COVID-19.

To characterize the features of the T cells that remain, the scientists obtained blood samples that had been collected from COVID-19 patients in an intensive care unit (ICU). While about half of these patients eventually recovered, the other half died of the disease. By examining samples taken at different times during the patients' stay in the ICU, the scientists were able to discern trends that they could relate to the disease outcome.

Much has already been learned about the immune response of COVID-19 patients during active infection or after convalescence. For example, studies from convalescent individuals, including Roan's own previous work, reveal how the immune system may provide long-term immunity. Less clear, however, is how the immune system may protect from severe illness or, conversely, contribute to its worsening and to death. To understand the cause of fatalities, the researchers needed to compare fatal to non-fatal severe cases.

Using CyTOF, a technique implemented in Roan's lab that distinguishes the many types of T cells circulating in the body, the scientists found profound differences between the ICU patients' T-cell response to the virus.

Differences also extended to the composition of the patients' T cells that recognize the SARS-CoV-2 virus. In particular, patients who survived harbored a growing number of T cells called Th1, which are known as important fighters of viral infection. Roan's team found molecular features on the Th1 cells that may explain why they were able to multiply in these patients.

By contrast, they found that patients who died had an elevated number of T cells secreting an inflammatory molecule that would contribute to a worsening of their lung condition. These patients also held more regulatory T cells recognizing the virus. Regulatory T cells normally help quiet down the immune response once infection subsides.

"Perhaps in these patients, regulatory T cells were activated too early and prevented effector T cells from ever mounting an adequate immune response to SARS-CoV-2," says Roan. "This could help explain the patients' paltry response to the virus."

Based on these findings, doctors might be able to predict the course of illness from the relative abundance of Th1 and regulatory T cells that recognize SARS-CoV-2 in a patient's blood.

Roan cautions, however, "Our findings show correlations, not causes. The immune system is complex, with many moving parts and possible interactions between them. Proving the cause of fatality will require further studies."

Another potential cause of fatality that the team discovered was a surge in T cells able to infiltrate the lungs of dying patients. By contrast, these cells decreased over time in the patients who recovered.

The scientists call these lung-homing cells "bystander T cells," because they are T cells that do not directly recognize the SARS-CoV-2 virus.

"Our study suggests that during severe COVID-19, bystander T cells are recruited from the blood into the lung, where they may contribute to immune-mediated pathology," says Roan.

What triggers the surge of bystander T cells in severe COVID-19 cases remains unclear, but may be in part mediated by proteins secreted by the lung that recruit these cells. Regardless, stemming their flow into the lung may help reduce lung damage and accelerate the recovery of patients with severe illness.

This approach is particularly promising, as drugs that antagonize a molecule found on the surface of the bystander T cells are already approved for the treatment of metastatic cancer.

"Our next step is to test these drugs in a mouse model of severe COVID-19," says Roan. "We hope that after further scrutiny, such drugs could rapidly be tested as adjunctive treatment for COVID-19."