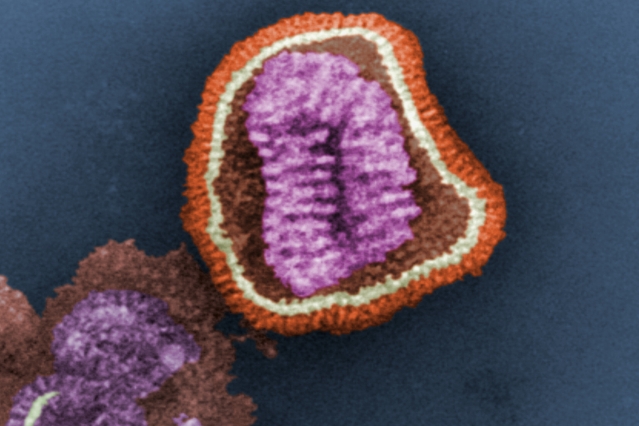 A team of MIT chemists has discovered the structure of a key influenza protein, a finding that could help researchers design drugs that block the protein and prevent the virus from spreading.

The protein, known as BM2, is a proton channel that controls acidity within the virus, helping it to release its genetic material inside infected cells.

"If you can block this proton channel, you have a way to inhibit influenza infection," says Mei Hong, an MIT professor of chemistry and senior author of the study. "Having the atomic-resolution structure for this protein is exactly what medicinal chemists and pharmaceutical scientists need to start designing small molecules that can block it."

MIT graduate student Venkata Mandala is the lead author of the paper, which appears today in Nature Structural and Molecular Biology. Other authors include graduate students Alexander Loftis and Alexander Shcherbakov and associate professor of chemistry Bradley Pentelute.

There are three classes of influenza virus -- A, B, and C -- and each of them produces a different version of the M2 protein. M2 is an ion channel that carries protons through the virus's outer membrane, known as the lipid envelope. These protons usually flow into the virus, making the interior more acidic. This acidity helps the virus to merge its lipid envelope with the membrane of a cellular compartment called an endosome, allowing it to release its DNA into the infected cell.

The A and B versions of M2 vary significantly in their amino acid sequences, so Hong and her colleagues set out to study what structural differences these proteins might have, and how those differences influence their functions. One key difference is that the BM2 channel can allow protons to flow in either direction, whereas the AM2 channel only allows protons to flow into the viral envelope.

To investigate the structure of BM2, the researchers embedded it into a lipid bilayer, similar to a cell membrane, and then used nuclear magnetic resonance (NMR) spectroscopy to analyze the structure with atomic-scale resolution. Very few ion channels have been studied at such high resolution because of the difficulty of studying proteins embedded within membranes. However, Hong has previously developed several NMR techniques that allow her to obtain accurate structural information from membrane-embedded proteins, including their orientation and the distances between atoms of the protein.

The M2 channel is made of four helices that run parallel to each other through the membrane, and Hong found that the alignment of these helices changes slightly depending on the pH of the environment outside the viral envelope. When the pH is high, the helices are tilted by about 14 degrees, and the channel is closed. When the pH goes down, the helices increase their tilt to about 20 degrees, opening up like a pair of scissors. This scissoring motion creates more space between the helices and allows more water to get into the channel.

Unlike the AM2 channel, the BM2 channel has an extra histidine at the virion-facing end of the channel, which the MIT team believes to explain why protons can flow in either direction through the channel. More study is needed to determine what kind of advantage this may provide for influenza B viruses, the researchers say.

Now that chemists know the structure of both the open and closed states of the BM2 channel at atomic resolution, they can try to come up with ways to block it. There is precedent for this type of drug development: Amantadine and rimantadine, both used to treat influenza A, work by wedging themselves into the AM2 channel pore and cutting off the flow of protons. However, these drugs do not affect the BM2 channel.

Hong's research group is now investigating another one of BM2's functions, which is generating curvature in lipid membranes in order to allow progeny viruses to be released from cells. Preliminary studies suggest that a portion of the protein that sticks out from the membrane forms a structure called a beta sheet that plays a role in inducing the membrane to curve inward.