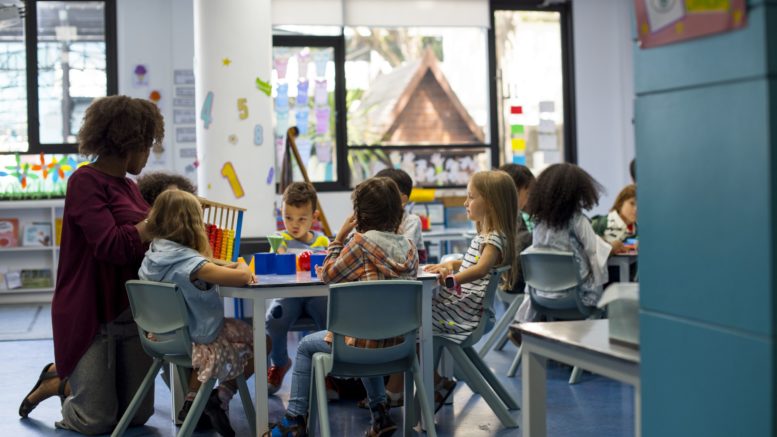 Group of diverse students at daycare

Influenza can be especially dangerous for children, who are at greater risk for serious complications from the illness, including hospitalization and even death. Yet childcare centers in the U.S. rarely require children or the adults who care for them to be vaccinated against flu, according to a new study published in the Journal of the Pediatric Infectious Diseases Society.

"When kids are in close proximity to each other in child care centers they spread infectious diseases very efficiently," said lead study author Timothy R. Shope, MD, MPH, of UPMC Children's Hospital of Pittsburgh. "The interventions that we use for older children and adults to prevent influenza, such as maintaining a distance of 3 feet between individuals, and coughing or sneezing into a shoulder or an elbow, don't work very well for a 2-year-old. So the best way we can protect them is through immunization."

The Centers for Disease Control and Prevention recommends influenza vaccination for everyone 6 months of age and older every flu season. In the new study, only 24.5 percent of childcare center directors reported having a flu vaccine requirement for children. Even fewer directors, 13.1 percent, said they had such a requirement for adult caregivers. The findings are drawn from a telephone-based survey, conducted in 2016, that included 518 directors across 48 states, randomly selected from a national database of licensed U.S. childcare centers.

"We can't depend on childcare directors' experience or knowledge for implementing their own influenza vaccine requirements," Shope said. "If we're concerned with the public health of children and preventing influenza morbidity and mortality, we have to legislate the issue."

Legislation that limits non-medical exemptions from childhood vaccination laws has advanced in several states in response to outbreaks of vaccine-preventable diseases, including measles, which suggests that there may be progress on this issue. In the meantime, parents should take the initiative themselves. "For parents, they don't need to wait until there is an influenza vaccination requirement for children in childcare," Shope said. "They should do what is best for their child's health and get them immunized."