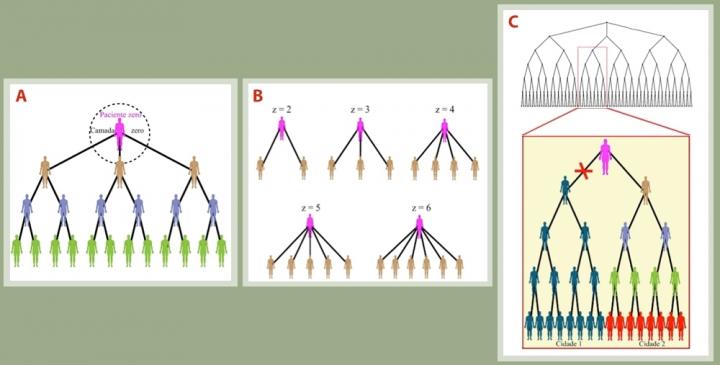 Mathematical models that describe the physical behavior of magnetic materials can also be used to describe the spread of the novel coronavirus that causes COVID-19.

This is the conclusion of a study conducted in Brazil by researchers affiliated with São Paulo State University (UNESP) in Rio Claro and Ilha Solteira and reported in an article published in Physica A: Statistical Mechanics and its Applications.

The central idea of the study was an analogy between concepts in magnetism and epidemiology in which electron interaction is compared with interaction among people. “We used the Ising model, widely used in several areas of physics, to demonstrate the importance of social distancing and isolation in reducing the rate at which the virus spreads,” Souza told Agência FAPESP.

The magnetic behavior intrinsic to electrons is associated with spin. Simply put, spin can be imagined as a tiny magnet “pointing up” toward the sky or “down” to the ground, so that an electron may spin up or spin down. Spins may interact, depending on the material, and this interaction is quantified in terms of exchange energy.

Using other more complex concepts from physics such as the Bethe lattice (see figure) and percolation theory, the group demonstrated the key role played by social distancing and quarantine in mitigating transmission of the virus.

“We considered that all those who come into contact with each other form a network, and that contact between infected and non-infected people is likely to spread the virus. For example, imagine the first infected person [patient zero] is in contact with other people and fails to take proper precautions [social distancing, face covering, hand hygiene etc]. The members of this group who are infected by the virus may transmit it to relatives, friends and other contacts, and these, in turn, may spread it to others, forming a ‘contact network’ that corresponds to a Bethe lattice in condensed matter physics,” Souza said.

“If patient zero had taken all the necessary precautions, they would have avoided transmitting the virus to all these people who were indirectly infected by them,” he added.