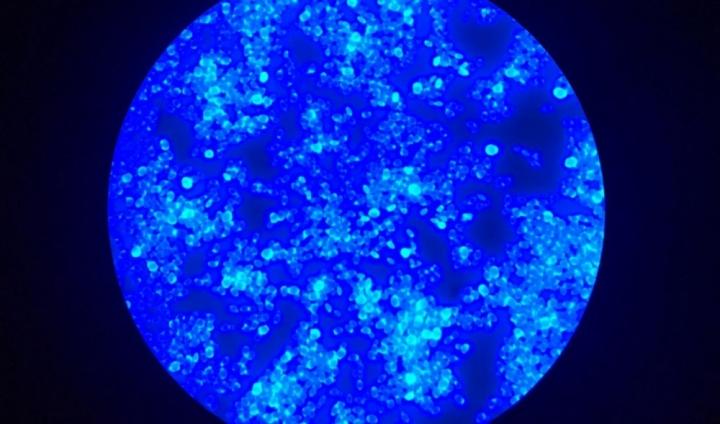 Fully occupied intensive care units (ICUs). Physically and mentally exhausted health workers. Chaotically overcrowded hospitals. These and similar problems posed by the COVID-19 pandemic in Brazil have created ideal conditions for the emergence of Candida auris, a microorganism some are calling a "superfungus" because of the speed with which it has developed drug resistance.

The first two cases were confirmed in December 2020 at a hospital in Salvador (state of Bahia, Northeast Brazil), and are described in the Journal of Fungi by a group of researchers led by Arnaldo Colombo, head of the Special Mycology Laboratory at the Federal University of São Paulo (UNIFESP). The study was supported by São Paulo Research Foundation - FAPESP.

"Nine other C. auris patients have since been diagnosed at the same hospital, some colonized [with the fungus in their organism but not doing harm] and others infected," Colombo told. "No other cases have been reported in Brazil, but there are grounds for concern. We're monitoring the evolutionary characteristics of C. auris isolates from patients at the hospital in Salvador, and we've already found samples with reduced sensitivity to fluconazole and echinocandins. The latter belong to the main class of drugs used to treat invasive candidiasis."

Except for C. auris, fungi of the genus Candida are part of the human gut microbiota and cause problems only when there are imbalances in the organism, Colombo explained. These include infections such as vaginal yeast infection and thrush (oral candidiasis), often caused by C. albicans.

In some cases, however, the fungus enters the bloodstream and causes a systemic infection known as candidemia, the most common form of invasive candidiasis, similar to bacterial sepsis. Invasion of the bloodstream and the immune system's exacerbated response to the pathogen can cause damage to several organs and even lead to death. According to scientific evidence, mortality among candidemia patients infected by C. auris can reach 60%.

"The species quickly becomes resistant to multiple drugs and isn't very sensitive to the disinfectants used by hospitals and clinics," Colombo said. "As a result, it's able to persist in hospitals, where it colonizes health workers and ends up infecting patients with severe COVID-19 and other long-stay critical patients."

"The virus can damage the intestinal mucosa of severe COVID-19 patients [facilitating invasion of the bloodstream by pathogens] so that the patient becomes vulnerable to candidemia," Colombo said.

Several countries have reported the emergence of C. auris during the COVID-19 pandemic, he added, making the need to intensify control of hospital-acquired infections throughout Brazil even more urgent. Rational use of antimicrobial drugs in ICUs is equally important. Since the start of the pandemic, azithromycin and other antibiotics have been more widely prescribed, mostly without a genuine justification.

C. auris was first isolated in Japan in 2009 but the scientific community paid it little attention until some years later when outbreaks of candidemia caused by the superfungus occurred in Asia and Europe. In 2016, an article by the UNIFESP group in the Journal of Infection reported the arrival of the species in the Americas via Venezuela. It was soon detected in Colombia, Panama and Chile.

"In 2017 we participated in a task force convened by the Health Ministry and ANVISA [Brazil's health surveillance authority] and wrote a technical standard [Risk Notice 01/2017] warning health services that precautionary measures should be taken to monitor the possible arrival of C. auris in Brazil, which was confirmed only at the end of last year," Colombo said.

Since then, the UNIFESP team has been monitoring the emergence of novel fungal pathogens in bloodstream infections documented by medical centers across Brazil, without detecting C. auris until now.

Five clades or lineages of C. auris have so far been described in the world. According to Colombo, the clade isolated in Salvador resembles the Asian original more closely than the variant detected in Venezuela and other South American countries, suggesting a second independent arrival of the superfungus on the continent.

"Alternatively, there may be a local environmental source, since none of the Brazilian patients infected by the fungus traveled abroad or had infected relatives," Colombo said.

Every month since December, the researchers have received samples of the clade isolated at the hospital in Salvador for testing of its sensitivity to antifungal drugs in their laboratory.

"In these tests, we expose the cultured microorganism to progressive concentrations of antifungals in order to determine the lowest dose that can inactivate it. In the case of C. auris present in samples recently isolated in Salvador, for example, the dose has to be four to five times larger than the dose used to inactivate the isolate cultured in December 2020," Colombo said.

In partnership with Dutch colleagues, the UNIFESP group is conducting a genetic sequencing study to see if the gene that confers drug resistance on C. auris has mutated during the period.

"The mechanism that enables the species to develop drug resistance isn't enzymatic degradation, as in so many bacteria that are resistant to antibiotics," Colombo said. "The fungus develops structural modifications in the proteins to which the drug binds to inhibit cell wall synthesis [glucan synthase in the case of echinocandins], which is key to its survival. We're seeing this phenomenon happen here in Brazil."

In addition to redoubled care with hygiene, surveillance efforts to detect suspected pathogens should be stepped up, he added. Confirming the presence of C. auris in a sample is no trivial task, requiring specific equipment. The most widely used technique is matrix-assisted laser desorption/ionization time-of-flight (MALDI-TOF) mass spectrometry, fairly commonplace in microbiology laboratories but not always available in hospitals in Brazil.

"If the analysis is conducted using conventional automated methods, C. auris can be confused with other species, such as C. haemulonii or C. lusitaniae. Ideally, any strain of Candida that displays drug resistance should be sent for analysis to a reference laboratory," Colombo said.