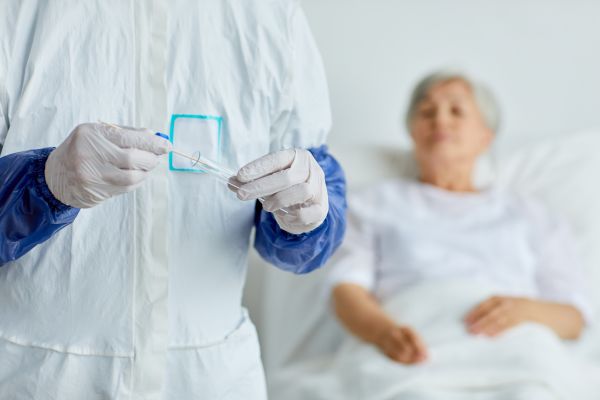 Older people and people with underlying medical conditions are at particular risk of severe COVID-19. A group of researchers from Charité - Universitätsmedizin Berlin have discovered one possible reason for this vulnerability. While these risk groups produce greater quantities of an important type of immune cell known as T-helper cells, their T-helper cells show impaired function. This 'molecular brake' on the immune system could serve as a potential new treatment target in patients with severe COVID-19. The researchers' findings have been published in the Journal of Clinical Investigation.

Soon after the emergence of COVID-19, medical experts from across the globe reported the same phenomenon. They found that older people and people with underlying medical conditions (such as cardiovascular disease and diabetes) were more likely to develop severe disease. There is likely an array of medical reasons why advancing age or health problems should make it more difficult for our bodies to fight an infection with SARS-CoV-2. One of the factors suspected of playing a major role in this regard was the immune system. An interdisciplinary team of researchers from Charité has collated findings which support this hypothesis.

The researchers were able to show a positive correlation between the frequency of virus-specific T-helper cells and the patients' age. The same positive correlation was found to exist in relation to the Comorbidity Index, a compound measure expressing the severity of 19 different underlying medical conditions: the higher the patient's Comorbidity Index, the higher the number of SARS-CoV-2-specific T-helper cells in their blood. However, the team also found that advancing age and overall comorbidity scores were linked to a decrease in the proportion of cells producing the messenger substance 'interferon gamma' (IFN?). Cells normally release this molecule when they have recognized a virus; it is used to stimulate other components of the body's immune response which are needed to fight the pathogen.

"Some of the SARS-CoV-2-specific T cells which we found in the blood of COVID-19 patients with risk factors no longer function properly," explains leading co-first author Dr. Arne Sattler, a researcher in the Translational Immunology Research Group at Charité's Department of General, Visceral and Vascular Surgery. Summing up the study's findings, Sattler says, "One might say that these T-helper cells are being slowed down in people with risk factors. We believe this has the potential to hamper the body's ability to mount an effective response against the pathogen."

One substance known to act as a molecular 'brake' on the immune system is the protein PD-1. Found on the surface of T cells, this protein normally ensures an appropriate immune response and prevents the immune system attacking the body. Notably, the Charité researchers were able to show that the virus-specific T-helper cells produced significantly more PD-1 in patients with acute infection than in patients who had recovered from relatively mild symptoms.

"Seen in combination with the findings from other researchers, our data suggest that PD-1 could be partly responsible for the fact that, in some people with COVID-19, the immune system produces insufficient quantities of messenger substances to be able to fight the pathogen," says Sattler. He adds, "COVID-19 patients may therefore benefit from treatments which aim to release this type of immune system brake. However, many more studies will be needed in order to clarify this matter."

1 Comment on "COVID-19 High-Risk Groups: Why the Immune System is Less Effective at Fighting the Virus"