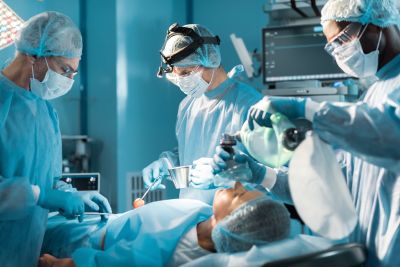 Following the first recorded death of an anesthetist from COVID-19 in the UK in November 2020, a review of available data published in Anesthesia (a journal of the Association of Anesthetists) shows that unexpectedly, despite their perceived increased exposure to COVID-19 patients and high-risk procedures, anesthetists and intensive care doctors appear to be at lower risk of being infected with SARS-CoV-2 and developing COVID-19.

"This very sad event is a moment for pause and reflection. Every death is a tragedy, and our first thoughts should be with Dr Subramanian's family, friends and colleagues," say the authors.

"Three separate studies from Oxford, Leicester and Birmingham and including more than 20,000 healthcare staff indicate that those working in anesthesia and intensive care had less than half the risk of infection than physicians dealing with COVID-19 patients on the wards. These studies also found significantly higher rates of infection in both front-line nurses and housekeeping staff compared to anesthetists and intensivists," say the authors. "And in a study of Scottish of hospital admission of healthcare workers, working in ICU was again associated with approximately half the risk of working in 'front door' roles. Even household contacts of 'front door' healthcare workers had a higher risk of hospital admission than those working in ICU."

The authors also conducted an analysis to explore whether deaths of anesthetists were lower than expected amongst the general population and amongst healthcare workers. Using data from The Royal College of Anesthetists census, NHS Digital, the Office of National Statistics, and their own database of healthcare worker deaths the authors compared the expected and observed number of deaths amongst UK anesthetists/ intensivists with various comparator groups.

Overall deaths amongst anesthetists and intensivists were disproportionately low - ranging between less than a half to a quarter of expected deaths based on the numbers working in this specialty. The number of deaths expected among anesthetists, based on representation of anesthetists among doctors, and COVID-19 related deaths among the general population would be several times higher than the single death recorded so far (3 or 4 in total).

The authors explain: "This analysis indicates that, irrespective of the comparator group used, deaths among anesthetists and intensivists are notably lower than expected and certainly not high, as some would have predicted."

The authors offer several possible explanations for the lower risk observed. These include better personal protective equipment or better use of it, working in well-ventilated environments and the possibilities that both the patients who are admitted to ICU are less infectious than those on the wards, and that the high risk procedures such as establishing a patient on a ventilator (including intubation) are not as high risk as has been assumed.

The authors say: "This analysis highlights both the relative safety of anesthetists and intensivists from occupational harm from SARS-CoV-2 and the increased risks for others working on the wards, both in clinical and non-clinical roles."

They conclude: "It is our opinion that those working in anesthesia and critical care should continue with current practices to maintain their own safety and that of their working environment. A more challenging question is whether some of the procedures that appear to keep anesthetists and intensivists safe such as high level protective respirators should be extended to general practice and the wards where other healthcare workers are more at risk."

Dr. Mike Nathanson, president of the Association of Anesthetists, said: "The whole profession was saddened to hear of the tragic death of Dr Krishnan Subramanian. It is reassuring to see that, to date, we have lost no further anesthestists or intensivists to COVID-19 despite their involvement on the front line of battling this pandemic. The death of each healthcare worker has been in our minds, however. This analysis reminds us of the risks, and of factors that may explain why anesthetists and intensivists appear to have so far largely escaped the worst of this illness. We are not complacent, and we will continue to work for the wellbeing of the anesthetists and intensivists we represent."