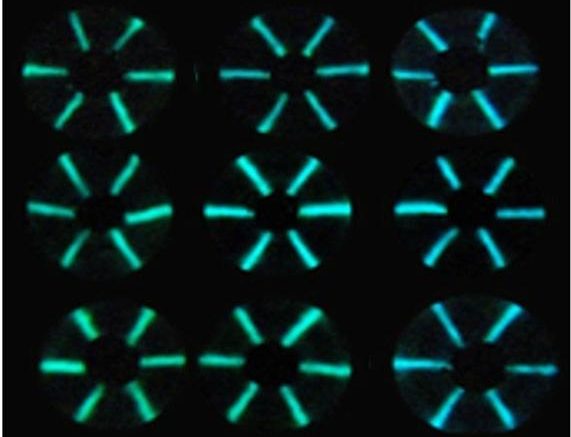 To defend the body, the immune system makes proteins known as antibodies that latch onto the perceived threat, be it HIV, the new coronavirus or, as is the case in autoimmune disease, part of the body itself. In a new proof-of-concept study in ACS Sensors, researchers describe a new system for detecting antibodies within a pinprick of blood within minutes, using an unlikely combination of cotton thread, glowing proteins and a smartphone camera.

While some tests simply detect the presence of an antibody, sometimes doctors want to know how much is circulating in the blood. Such quantitative tests are used to diagnose a number of conditions, including infections and autoimmune diseases. Although a quantitative antibody test is not yet approved for use in the U.S., such a test could potentially aid in assessing immunity to SARS-CoV-2. However, quantitative testing currently requires expensive, sophisticated instruments in labs, and efforts to make it more accessible have had only limited success. So, Maarten Merkx, Daniel Citterio and colleagues tested an approach that could provide a small, inexpensive alternative.

The researchers' microfluidic thread-based analytical device (μTAD) relies on light-emitting sensor proteins held on a thread. In the presence of the right antibodies, the color of the light emitted by the sensors changes. The shift, from green to blue, correlates with the concentration of antibodies in a sample. Using a finger-prick-sized drop of pigs' blood spiked with antibodies against HIV, the team showed that their system could successfully detect antibody levels within five minutes. In addition, the device can test for the amounts of several different antibodies in a single blood sample and doesn't require extensive handling and incubation steps. They found that a smartphone camera, outfitted with an adaptor, could pick up on the shifts in the light's color, while the device itself could convert color data into test results and transmit that information. With further development, this combination of technologies could provide user-friendly, one-step analysis of antibody concentration, according to the researchers.

The authors acknowledge funding from the Japan Society for the Promotion of Science through a Bilateral Joint Research Projects/Seminars grant and a Grant-in-aid for Scientific Research, the Terumo Life Science Foundation, and the European Research Council Starting and Proof of Concept grants.

11 Comments on "Detecting Antibodies With Glowing Proteins, Thread and a Smartphone"