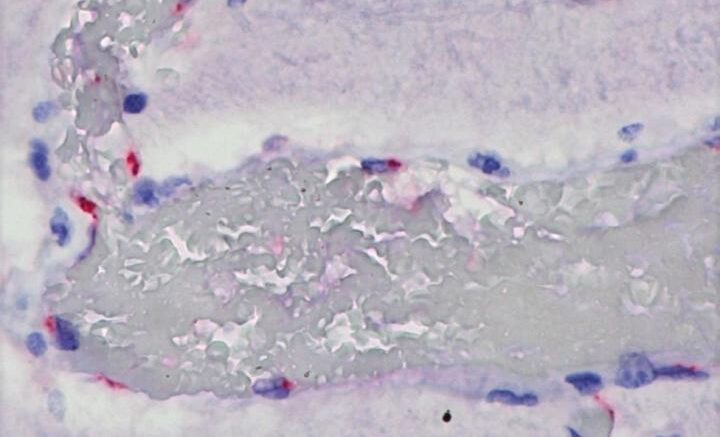 Electron micrograph of the brain of a child with MIS-C associated with COVID-19 and encephalopathy: immunohistochemical detection of SARS-CoV-2 nucleocapsid antigen in brain endothelial cells, with cytoplasm stained red. Courtesy of Amaro Nunes Duarte Neto

Besides common symptoms such as fever, cough and respiratory distress, some children have an atypical form of COVID-19 known as multisystem inflammatory syndrome in children (MIS-C), characterized by persistent fever and inflammation of several organs, such as the heart and intestines, as well as the lungs to a lesser extent. Reports of MIS-C have been increasingly associated with severe cases and deaths in several countries including Brazil since the onset of the pandemic.

Researchers affiliated with the University of São Paulo's Medical School (FM-USP) and Adolfo Lutz Institute in Brazil performed the largest series of autopsies to date on children who died from COVID-19. Their findings show that the ability of SARS-CoV-2 to invade and damage several organs is one of the factors leading to MIS-C, producing a wide array of clinical manifestations that include abdominal pain, heart failure and seizures, as well as persistent fever.

The study was supported by São Paulo Research Foundation - FAPESP and reported in an article in EClinicalMedicine, a Lancet group journal.

"The direct action of the virus on the tissue of various organs is one of the reasons why children with this syndrome have an exacerbated and altered inflammatory response to infection," says Marisa Dolhnikoff, last author of the article. Dolhnikoff is a professor at FM-USP.

The researchers performed autopsies on five children who died from COVID-19 in São Paulo: one boy and four girls aged between 7 months and 15 years. Two were seriously ill before being infected by SARS-CoV-2, one with cancer and the other with a congenital genetic disorder.

A minimally invasive technique, ultrasound-guided with coaxial and punch needles, was used to collect tissue samples from all major organs. The presence of SARS-CoV-2 in the samples was determined by real-time reverse transcription polymerase chain reaction (RT-PCR, the technique also used to diagnose COVID-19) and by immunohistochemistry, in which antibodies were deployed to detect the viral nucleocapsid protein (N) and one of the spike proteins (S2).

Histopathological analysis showed that both children with severe pre-existing disease had "classic" severe COVID-19, characterized by acute respiratory distress due to extensive damage to the lung alveoli caused by SARS-CoV-2. The virus was also detected in other organs.

"We found that SARS-CoV-2 had spread throughout the body via the blood vessels, infecting various types of cell and tissue in these children. The clinical manifestations varied according to the organ targeted," Dolhnikoff said. "It's important for pediatricians to watch out for these possible differences in the clinical manifestations of COVID-19 in children of all ages so that the infection is diagnosed and MIS-C can be treated early on."

MIS-C may occur a few days or weeks after infection by SARS-CoV-2. The runaway inflammatory reaction was thought to occur whether or not the virus was still in the organism, as a result of the immune response, but the study found evidence that the manifestations of MIS-C are also triggered by the direct action of the virus on the cells of infected organs.

"We're not saying everything described to date about pediatric multisystem inflammatory syndrome is wrong. We're merely adding the observation that the damage done to tissues by the virus is associated with this exacerbated inflammatory response in children, and is very probably a key component in its induction," Dolhnikoff said.

Why some children respond to infection by SARS-CoV-2 with the exacerbated inflammation that characterizes MIS-C is unknown, but the answer may include a genetic component.

The researchers found that the virus's main targets included endothelial cells, which line blood vessels of all sizes and regulate exchanges between the bloodstream and the surrounding tissues. "One hypothesis is that when an endothelial cell is infected it activates bloodstream mediators that trigger an inflammatory cascade and the other reactions observed in children with MIS-C, such as persistent fever, colitis, myocarditis and encephalitis," said Amaro Nunes Duarte Neto, first author of the article. Neto is an infectious disease specialist and pathologist at FM-USP and Adolfo Lutz Institute.

"The virus induces these reactions in the cells, but it's the immune system that produces a response with adverse effects on the patient," he said. "It's not an autoimmune response, however, like what we see in lupus, psoriasis or inflammatory arthritis, which also involve damage to blood vessels. In MIS-C, the virus is involved directly."

Electron microscopy analysis by Elia Caldini, a professor at FM-USP, supported these conclusions. Electron microscopes magnify viral particles more than 50,000 times directly, without the use of reagents. The technique enabled the researchers to describe alterations in cell cytoplasm associated with the presence of the virus.

"To confirm our identification of the virus unequivocally, we were the first to use immunolabeling of SARS-CoV-2 in conjunction with electron microscopy," Caldini said. "We coupled colloidal gold particles to the specific antibodies used in light microscopy against structural viral proteins."

The researchers also detected microthrombi (small blood clots) for the first time in children. This had already been observed and reported in adults. "Phenomena relating to blood clotting should always be considered in COVID-19.

Our electron microscopy analysis showed that capillary blood vessels in all organs were obstructed by accumulated red and white blood cells, cellular debris, and fibrin, with disruption of the endothelial wall," Caldini said.