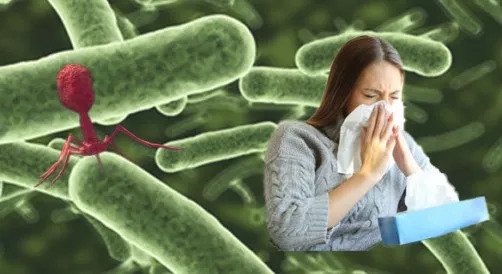 A runny nose isn’t the only place mucus exists in our bodies; it also lines many passageways, like the digestive system, to keep them lubricated. Massachusetts Institute for Technology (MIT) researchers have found that sugars in mucus help control and disarm pesky microbes in our bodies. Most people think the slimy substance is a nuisance and gross, but it plays a vital role in many bodily systems.

Mucins, the gel-forming component in mucus, are coated in glycans, or sugars, and have been known to suppress the formation of biofilm, a microbial growth form that is often associated with infections and difficult to treat with antibiotics. This study, published in Nature Microbiology, finds a broader range of functions for the glycans attached to mucins. Researchers think they may not need to actually kill the pesky microbes, but instead, disarm them and render them less infectious.

“Antibiotics are becoming less effective against fast-adapting bacteria. We need to leverage naturally--occurring defense mechanisms to protect ourselves from microbes,” said David Rampulla, Ph.D., director of the NIBIB Biomaterials and Biomolecular Constructs program.

Mucus is densely packed with harmful microbes, so how does the body use this slimy substance to prevent infections? One would think something in mucus may kill the bacteria. The MIT team, led by Katharina Ribbeck, Ph.D., Professor in the Biological Engineering Department, has found that mucus tames pathogens contained in its sticky matrix so the immune system can kick in and fight when it needs to—but mucus doesn’t kill bacteria on its own.

“Many used to think the structural network of mucus was purely for mechanical purposes, but we’ve learned it plays a critical role in the way it controls problematic pathogens as well. We are testing to see if this function is universal across many species,” said Ribbeck.

The researchers dissected the different parts of mucus and found that the key ingredient that tamed bacteria was glycans. Glycans are chains of sugar molecules that form branched structures. The researchers questioned if the glycans would have the same power without the other components in mucus. Results confirmed that the glycans are robust at defusing pathogens on their own.

This study focused on the glycans’ response to a specific bacterium, P. aeruginosa, that causes infections in people with a compromised immune system. Graduate student, Kelsey Wheeler, found the glycans made the bacteria less potent by suppressing genetic pathways responsible for bacterial communications and ones that allow clumping or toxin production. These pathways enable their infectious behavior.

Ribbeck said one of her greatest challenges has been convincing people that mucus is worth studying and not just a waste product. “We can create alternative therapeutic approaches that don’t use antibiotics to kill microbes, but instead use nature’s form of biological engineering – mucus,” said Ribbeck.

Up next for Ribbeck is to break the glycan code and understand which glycans tame a specific pathogen and how they bind together. She also wants to learn more about if and how microbes can sense glycans and consequently try to escape them. Many different types of bacteria coexist in communities inside our bodies and, in part, make up a person’s microbiome, which plays an essential role in digestion and immune health. Ribbeck thinks glycans play a significant part in maintaining and altering the microbiome in our bodies, and her lab is beginning to test the theory.

Timothy Lu, PhD, an MIT associate professor in the Department of Biological Engineering and Electrical Engineering and Computer Science, has been working on another alternative approach to treating antibiotic-resistant bacterial infections. Lu has been developing a way to engineer a special type of virus called a bacteriophage or phage to kill different strains of E. coli.

Antibiotics typically inhibit or regulate enzymes that are responsible for controlling the growth and spread of bacteria, giving the immune system time to fight infections. Phages kill bacteria through a different mechanism. Most commonly, phages recognize a specific receptor on a bacterium that allows them to bind and inject their virus into the bacteria. The virus will replicate and eventually kill the bacteria.

“Using phages to treat antibiotic-resistant infections is not a new concept,” said Lu. He explained that one could perform an extensive, timely screen to identify naturally occurring phages that kill specific types of bacteria. “But at the end of the screen, you will likely be left with a diverse group of phages that will be difficult to manufacture and scale-up in a commercially reproducible, cost-effective way.”