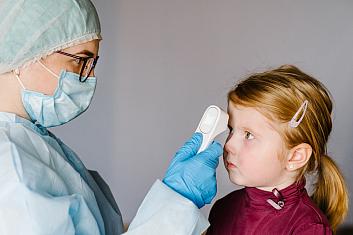 "While these findings provide some reassurance about the safety of asymptomatically infected children attending school, these unanswered questions suggest that risk mitigation measures in daycares, schools and the community remain critical to reduce the spread of COVID-19. Children must continue to wear masks, maintain social distance and wash their hands frequently," said first author Larry Kociolek, MD, pediatric infectious diseases expert at Ann & Robert H. Lurie Children's Hospital of Chicago and assistant professor of pediatrics at Northwestern University Feinberg School of Medicine. "At this stage, we can't predict which children are likely to carry more or less virus, because in every age group we tested, there were some asymptomatic kids with a higher viral load. However, even the groups of asymptomatic kids with highest viral load in our study still had lower viral loads than the children with symptoms."

The study included 339 asymptomatic and 478 symptomatic children (ages 0-17 years) matched by age groups. All children in the study screened positive for COVID-19 using PCR tests at nine children's hospitals across the United States and Canada. To be able to combine PCR data from the different assays used at the nine institutions, the team adjusted cycle threshold (Ct) values by centering each value around the institutional median Ct value from symptomatic children tested with that assay, and also converted them to estimated viral loads (copies/mL). It is the first large and comprehensive investigation into SARS-CoV-2 viral loads in asymptomatic children.

The analysis demonstrated that asymptomatic children with diabetes and/or recent contact with a COVID-19 case, as well as those tested for surveillance purposes (rather than for pre-procedure or pre-admission purposes), had significantly higher estimated risk of being in the quartile with the highest viral burden. The authors note that the finding that patients more likely to have recent infections (contact/surveillance) were more likely to have higher viral loads suggests that timing of infection relative to diagnostic testing impacted the viral loads in the asymptomatic kids in the study. However, they also note that even in the asymptomatic surveillance sub-cohort with highest viral loads, median viral loads were still significantly lower than in the symptomatic cohort.

The authors also point out that the levels of the virus they found in the asymptomatic children were mostly lower than the levels that the available rapid antigen tests are able to detect.

"It is important to recognize that rapid antigen tests are less sensitive than the PCR tests used in hospitals, and that many of the asymptomatic kids in our study likely would have tested negative using the rapid tests based on our understanding of the limits of detection of those tests," said Pollock. "Our findings should raise caution about using low sensitivity tests for asymptomatic screening programs in pediatric populations. Overall, we want to encourage more studies to better understand the viral loads in asymptomatic kids--particularly peak viral loads early in infection."

Be the first to comment on "Do Asymptomatic Kids With COVID-19 Carry Less Virus?"