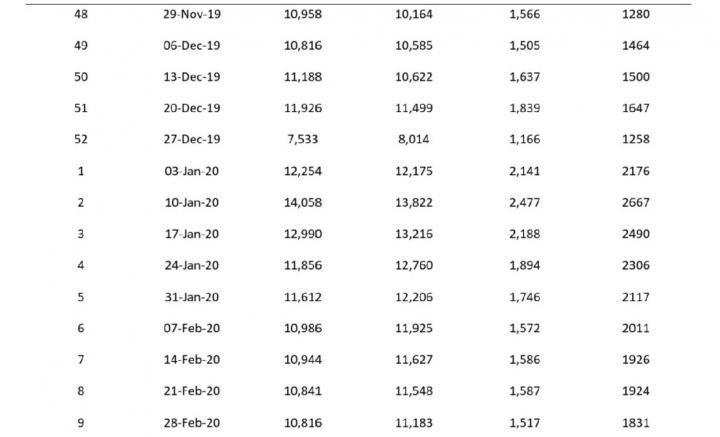 Death rates in England and Wales: comparing deaths between December 2019 and March 2020 to death rates over the same period in the previous 5 years. Courtesy of WMG at the University of Warwick

Researchers from the Institute of Digital Healthcare, WMG and Warwick Medical School, at the University of Warwick, have analysed the mortality statistics in the United Kingdom during the initial phases of the severe acute respiratory coronavirus 2 (SARS-CoV-2) pandemic to understand the impact of the pandemic on national mortality figures.

They did this by carrying out a retrospective review of weekly national mortality statistics in the United Kingdom over the previous five years, including subgroup assessment of respiratory mortality rates, from the end of November until the end of March.

The analysis found that during the first months of 2020, when the early phases of the severe acute respiratory coronavirus 2 (SARS-CoV-2) pandemic was apparent in the UK, there were consistently fewer deaths each week compared with the previous five years.

However, such a pattern has not been seen in the previous five years of data, researchers coined this the SARS-CoV-2 Paradox, and propose the reason why the death rate was lower during the early stages of the pandemic in comparison to previous years could be due to social distancing, as whilst the government enforced social distancing in the middle of March, some had already engaged with this, especially higher risk groups/elderly, leading to a reduction in the mixing of those with infectious diseases including, but not exclusive of, SARS-CoV-2.

It could also be due to the emphasized importance of washing hands, staying home when you feel unwell and coughing or sneezing into a tissue, this is likely to reduce the number of cases of other infectious disease and, also, slow the spread of various infectious diseases. Finally, iatrogenic mortality may be reduced, as hospital admission numbers have reduced; and there may thus be a reduction in the spread of hospital-acquired infections, such as methicillin-resistant staphylococcus aureus (MRSA). Similarly, reductions in elective surgery (in order to prepare intensive care and hospital bed capacity) may result in fewer iatrogenic deaths.

The graph shows week 12, the 20th March there was an increase in deaths, with 2020 deaths being 10,645, and previous 5 year mean to be 10,573, this could be related to covid-19, as symptoms such as headaches and loss of taste weren't identified, however it could also be attributed to closed GPs, an overwhelmed A&E and ITUs being increasingly selective about which patients to take as lockdown was formally announced that week.

Professor Theo Arvanitis, from the Institute of Digital Healthcare at WMG, University of Warwick comments, "Each year, infectious diseases make a significant contribution towards avoidable deaths in England and Wales. People with multi-morbidities are at particular risk, and this is a key area of research for the Institute of Digital Healthcare. Social distancing measures are likely to impact the spread of all infectious diseases, despite their target being a reduction in the spread of SARS-CoV-2 virus. This lack of disease spread could be causing a reduction in death rate. Another factor could be concerns around the virus, which could mean people are making more conscious health decisions in terms of eating, exercise, reducing smoking and resting, when they feel unwell, or seeking advice from 111 about their symptoms. It is important to note that whilst we have seen a reduction in mortality in the 'run-up' to seeing the full extent of SARS-CoV-2 that this may also have negative future consequences. It is possible that we may see a significant rebound if this mortality has simply been delayed rather than avoided in its entirety. If a rebound affect is seen, this may coincide with the peak demand for SARS-CoV-2 medical beds, creating an even greater healthcare need. Overall, this stresses the need for careful ongoing observation and exploration of these mortality trends. This assessment must take account not just of the SARS-CoV-2 peak, but also the time period prior to, and following the pandemic."