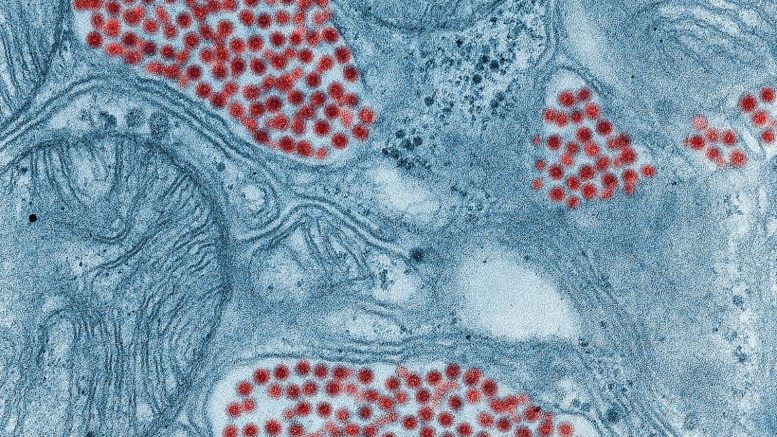 Under a magnification of 83,900X, this digitally colorized transmission electron microscopic (TEM) image depicts a salivary gland tissue section that had been extracted from a mosquito, which was infected by the eastern equine encephalitis (EEE) virus. The viral particles have been colorized red.  Courtesy of CDC/Fred Murphy; Sylvia Whitfield

Although eastern equine encephalitis (EEE), a mosquito-borne illness, has existed for centuries, 2019 has been a particularly deadly year for the disease in the United States. As of Nov. 12,2019,  36 confirmed cases of EEE had been reported by eight states; 13 of these cases were fatal. In a new commentary in The New England Journal of Medicine, officials from the National Institute of Allergy and Infectious Diseases (NIAID), part of the National Institutes of Health, describe the eastern equine encephalitis virus (EEEV) that causes EEE, current research efforts to address EEE, and the need for a national strategy to address the growing threat of EEEV and other emerging and re-emerging viruses spread by mosquitoes and ticks (known as arboviruses).

There were 12 documented U.S.-based EEE epidemics between 1831 and 1959. The virus is spread between Culiseta melanura mosquitoes and various tree-perching birds found in forested wetlands. Occasionally, other mosquito species transmit the virus to people and other mammals. In people, EEEV takes roughly 3 to 10 days to cause symptoms. The virus initially causes fever, malaise, intense headache, muscle aches, nausea and vomiting; specific diagnostic testing may not reveal anything as EEEV is difficult to isolate from clinical samples, and testing for EEEV antibodies may be negative. Neurologic signs of EEE, which may appear within five days of infection, initially are nonspecific but rapidly progress. Most people (96%) infected with EEEV do not develop symptoms; however, of those who do, one-third or more die, and the others frequently suffer permanent and severe neurologic damage.

Although point-of-care diagnostics for EEE and many other mosquito-borne causes of encephalitis are not available, currently they would be of limited value in the absence of effective treatment, the authors write. So far, no antiviral drug has proven safe and effective against EEE, but many compounds are being assessed. Monoclonal antibodies have been found effective in an experimental animal model but only when given prior to infection. Patients with EEE are currently treated with supportive care, which often includes intensive care in a hospital and ventilator assistance. Patients with EEE are not infectious, and social support and counseling for both the patient and the family are vitally important given the seriousness of the disease, the authors write.

Several EEE vaccine candidates are in development but may have trouble reaching advanced development and licensure, according to the authors. EEE outbreaks are rare, brief and focal, and occur sporadically in unpredictable locations, making it difficult to identify an appropriate target population for vaccination. Efforts to develop mosquito-saliva vaccines that would be effective against multiple mosquito diseases, including EEE, are in early stages.

In the absence of effective EEE vaccines and treatments, state and local health departments can provide an early warning of imminent human infections by surveilling horses, birds and mosquitoes, but these efforts are threatened by insufficient funding, according to the authors. In recent years, the Americas have seen a growing number of emerging and re-emerging arboviruses, such as dengue, West Nile, chikungunya, Zika and Powassan. Although outbreaks of EEE disease thus far have been infrequent and focal, the spike in cases in 2019 and the looming presence of other, potentially deadly arboviruses in the United States and globally demand a national defense strategy for arboviruses and other vector-borne diseases, the authors write. Although the best way to address these viruses is not entirely clear, to “ignore them completely and do nothing would be irresponsible,” say the authors.