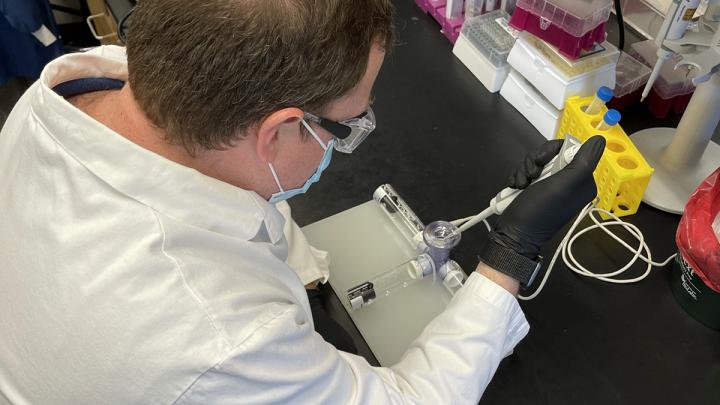 Researcher Daryll Vanover works with the nebulizer he adapted to test a new mRNA-based treatment for flu and Covid-19. The team used mRNA technology to code for a protein called Cas13a that destroys parts of the RNA genetic code that viruses use to replicate in cells in the lungs. It was developed by researchers in Philip Santangelo's lab in the Wallace H. Coulter Department of Biomedical Engineering. Courtesy of Georgia Institute of Technology

With a relatively minor genetic change, a new treatment developed by researchers at the Georgia Institute of Technology and Emory University appears to stop replication of both flu viruses and the virus that causes Covid-19. Best of all, the treatment could be delivered to the lungs via a nebulizer, making it easy for patients to administer themselves at home.

The therapy is based on a type of CRISPR, which normally allows researchers to target and edit specific portions of the genetic code, to target RNA molecules. In this case, the team used mRNA technology to code for a protein called Cas13a that destroys parts of the RNA genetic code that viruses use to replicate in cells in the lungs. It was developed by researchers in Philip Santangelo's lab in the Wallace H. Coulter Department of Biomedical Engineering.

"In our drug, the only thing you have to change to go from one virus to another is the guide strand -- we only have to change one sequence of RNA. That's it," Santangelo said. "We went from flu to SARS-CoV-2, the virus that causes Covid-19. They're incredibly different viruses. And we were able to do that very, very rapidly by just changing a guide."

The guide strand is a map that basically tells the Cas13a protein where to attach to the viruses' RNA and begin to destroy it. Working with collaborators at the University of Georgia, Georgia State University, and Kennesaw State University, Santangelo's team tested its approach against flu in mice and SARS-CoV-2 in hamsters. In both cases, the sick animals recovered.

Their results are reported Feb. 3 in the journal Nature Biotechnology. It's the first study to show mRNA can be used to express the Cas13a protein and get it to work directly in lung tissue rather than in cells in a dish. It's also the first to demonstrate the Cas13a protein is effective at stopping replication of SARS-CoV-2.

What's more, the team's approach has the potential to work against 99% of flu strains that have circulated over the last century. It also appears it would be effective against the new highly contagious variants of the coronavirus that have begun to circulate.

The key to that broad effectiveness is the sequence of genes the researchers target.

"In flu, we're attacking the polymerase genes. Those are the enzymes that allow the virus to make more RNA and to replicate," said Santangelo, the study's corresponding author.

With help from a collaborator at the Centers for Disease Control and Prevention, they looked at the genetic sequences of prevalent flu strains over the last 100 years and found regions of RNA that are unchanged across nearly all of them.

"We went after those, because they're far better conserved," Santangelo said. "We let the biology dictate what our targets would be."

Likewise, in SARS-CoV-2, the sequences the researchers targeted so far remain unchanged in the new variants.

The approach means the treatment is flexible and adaptable as new viruses emerge, said Daryll Vanover, a research scientist in Santangelo's lab and the paper's second author.

"One of the first things that society and the CDC is going to get when a pandemic emerges is the genetic sequence. It's one of the first tools that the CDC and the surveillance teams are going to use to identify what kind of virus this is and to begin tracking it," Vanover said. "Once the CDC publishes those sequences -- that's all we need. We can immediately screen across the regions that we're interested in to target it and knock down the virus."

Vanover said that can result in lead candidates for clinical trials in a matter of weeks -- which is about how long it took them to scan the sequences, design their guide strands, and be ready for testing in this study.

"It's really quite plug-and-play," Santangelo said. "If you're talking about small tweaks versus large tweaks, it's a big bonus in terms of time. And in pandemics -- if we had had a vaccine in a month or two after the pandemic hit, think about what things would look like now. If we had a therapy a month after it hit, what would things look like now? It could make a huge difference, the impact on the economy, the impact on people."

The project was funded by the Defense Advanced Research Projects Agency's (DARPA) PReemptive Expression of Protective Alleles and Response Elements (PREPARE) program, with the goal of creating safe, effective, transient, and reversible gene modulators as medical countermeasures that could be adapted and delivered rapidly. That's why the team decided to try a nebulizer for delivering the treatment, Santangelo said.

"If you're really trying to think of something that's going to be a treatment that someone can actually give themselves in their own house, the nebulizer we used is not terribly different from one that you can go buy at a pharmacy," he said.

The team's approach also was sped along by their previous work on delivering mRNA to mucosal surfaces like those in the lungs. They knew there was a good chance they could tackle respiratory infections with that approach. They decided to use mRNA to code for the Cas13a protein because it's an inherently safe technique.

"The mRNA is transient. It doesn't get into the nucleus, doesn't affect your DNA," Santangelo said, "and for these CRISPR proteins, you really don't want them expressed for long periods of time."

He and Vanover said additional work remains -- especially understanding more about the specific mechanisms that make the treatment effective. It has produced no side effects in the animal models, but they want to take a deeper look at safety as they consider moving closer to a therapy for human patients.

"This project really gave us the opportunity to push our limits in the lab in terms of techniques, in terms of new strategy," said Chiara Zurla, the team's project manager and a co-author on the paper. "Especially with the pandemic, we feel an obligation to do as much as we can as well as we can. This first paper is a great example, but many will follow; we've done a lot of work, and we have a lot of promising results."

This research was supported by the Defense Advanced Research Projects Agency, grant No. HR00111920008. Any opinions, findings, and conclusions or recommendations expressed in this material are those of the authors and do not necessarily reflect the views of any funding agency.