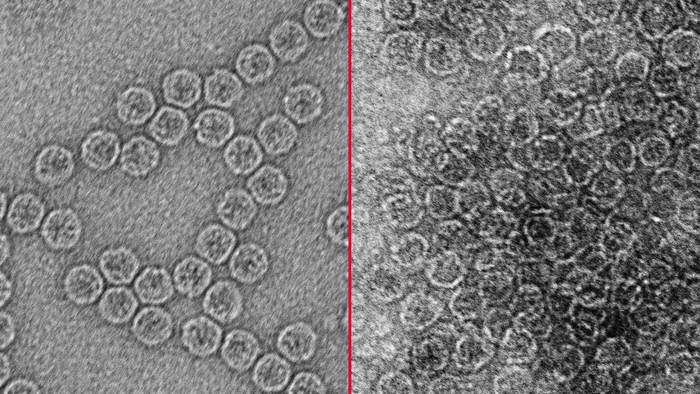 Using sophisticated microscopy and computational analysis, Texas A&M University researchers have now validated the merit of a water purification technology that uses electricity to remove and inactivate an assortment of waterborne viruses. They said the yet-to-be-implemented water purification strategy could add another level of safety against pathogens that cause gastrointestinal ailments and other infections in humans.

“There is always a need for new techniques that are better, cheaper and more effective at safeguarding the public against disease-causing microorganisms,” said Shankar Chellam, professor in the Zachry Department of Civil and Environmental Engineering. “The water purification technique investigated in this study is a promising strategy to kill even more viruses at the earliest stages of water purification.”

The researchers have detailed their findings in the journal Environmental Science & Technology.

Before water reaches homes, it undergoes multiple purification steps, namely coagulation, sedimentation, filtration and disinfection. Conventional coagulation methods use chemicals to trigger the clumping of particles and microbes within untreated water. These aggregates can then be removed when they settle as sediments. While effective, Chellam noted that the chemicals used for coagulation could be very acidic, making their transport to treatment plants and storage a challenge.

Instead of chemicals-based coagulation, the researchers investigated if an up-and-coming coagulation method that uses electricity was as effective at removing microbes from water. In particular, they used a surrogate of a nonenveloped virus, called MS2 bacteriophage, for their study. Their choice of microbes was motivated by the fact that MS2 bacteriophage shares structural similarities with many nonenveloped viruses that can persist in the water after treatment and cause disease in humans.

For their experiments, the researchers inserted iron electrodes in a sample of untreated water laden with viruses. When they passed electrical currents, the anode oxidized, releasing iron ions into the solution. These ions combine with dissolved oxygen to produce hydroxyl radicals and also iron-rich precipitates. In the process, they found that as the iron precipitated, the virus attached to these clumps to form bigger aggregates, which could be easily removed from the water.

Next, they investigated if this process also inactivated the virus. But while the iron aggregates helped in capturing the virus, they presented a problem to picture inactivation using electron microscopy.

“Clumping causes a tremendous challenge because there is no easy way to isolate the virus from the iron-rich aggregates, making it difficult to visualize viral damage and analyze if electrocoagulation was the cause of the viral damage or the virus extraction from the iron-rich clumps,” said Anindito Sen, a research scientist at the Texas A&M Microscopy and Imaging Center.

To address this problem, Chellam’s graduate student Kyungho Kim with Sen’s guidance developed a novel computational technique to directly image the viruses aggregated alongside iron. Put briefly, they digitally inflicted damages on 3D images of an intact MS2 bacteriophage. Then they generated 2D versions of the damaged 3D model. Last, they compared these images with 2D microscopic images of the virus obtained after electrocoagulation.

The researchers found that the damage in electrocoagulated viruses ranged from 10% to greater than 60%. Further, by following the same analysis with bacteriophages isolated from conventional coagulation, they observed that the viruses were not inactivated.

“The traditional multistep process of water purification has been there to ensure that even if one step fails, the subsequent ones can bail you out — a multiple barrier approach, so to speak,” Chellam said. “What we are proposing with electrocoagulation is process intensification, where coagulation and disinfection are combined within a single step before subsequent purification stages, to ensure better protection against waterborne pathogens.”