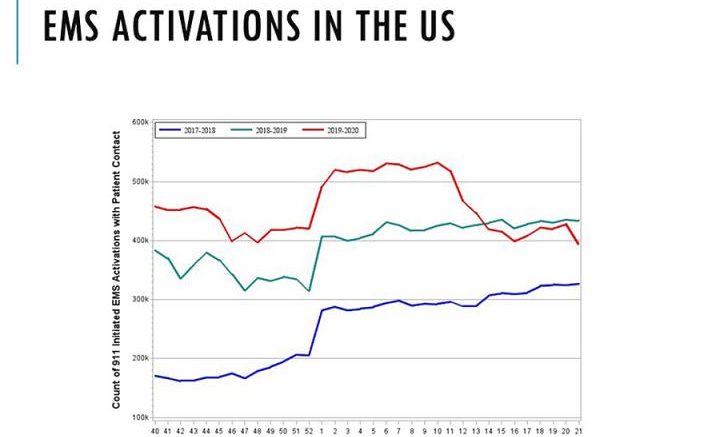 This graphic represents over 37 million EMS calls (activations) across the US. The number of states submitting to the national EMS repository increased over the study period (2017 - 32 states, 2018 - 40 states, 2019 - 44 states). Courtesy of Society for Academic Emergency Medicine

Since early March and the start of the COVID-19 pandemic in the U.S., 911 calls for emergency medical services have dropped by 26.1 % compared to the past two years, a new study led by a University at Buffalo researcher has found.

But the study also found that EMS-attended deaths have doubled, indicating that when EMS calls were made, they often involved a far more serious emergency.

"The public health implications of these findings are alarming," said E. Brooke Lerner, PhD, first author on the paper and professor and vice chair for research in the Department of Emergency Medicine in the Jacobs School of Medicine and Biomedical Sciences at UB.

"When people are making fewer 911 calls but those calls are about far more severe emergencies, it means that people with urgent conditions are likely not getting the emergency care they need in a timely way," she said. "The result is increased morbidity and mortality resulting from conditions not directly related to exposure to SARS-CoV2."

This finding covered the six-week period that began on March 2, and this trend persisted through the end of May.

"The doubling of deaths and cardiac arrests during this relatively short period of time, from March through May, demonstrates that people who need emergency health care may be delaying care such that their lives are actually in jeopardy," said Lerner.

"This may mean that future consideration needs to be given to how we message the risks associated with seeking medical care during a pandemic," said Lerner. "At the same time that we are stressing how to stay safe from COVID-19, it may also be necessary to stress how important it is to continue to seek care for serious conditions unrelated to the novel coronavirus." Lerner added that the findings echo those of studies in other countries, such as Italy, where there was an increase in heart attack fatalities during the height of the pandemic there.

"The fact that this trend persists even as the pandemic in some areas has started to lessen in severity shows that the fear of accessing healthcare has continued," Lerner said.

One positive, unsurprising finding was that the rate of 911 calls related to injuries declined for the obvious reason that during times when regions were shutdown, there were fewer opportunities for driving and recreation-related injuries.

The study also revealed significant issues related to the financial viability of EMS in this type of environment.

"The financial strain on EMS agencies will have long-term ramifications for maintaining this important safety net for our communities, especially those agencies whose revenue is based solely on patient transports," said Lerner.

The study consisted of a comparative, retrospective analysis of standardized patient care records that are submitted by more than 10,000 EMS agencies across 47 states and territories nearly in real-time. Those data are submitted to the National Emergency Medical Services Information System (NEMSIS) database, which stores EMS data nationwide.

The study was published online June 17 in Academic Emergency Medicine. Co-authors are Craig D. Newgard, MD, of Oregon Health and Science University, and N. Clay Mann, MD, of the University of Utah School of Medicine.

The work was supported by the National Highway Traffic Safety Administration, Office of Emergency Medical Services and the Health Resources and Services Administration of the U.S. Department of Health and Human Services.