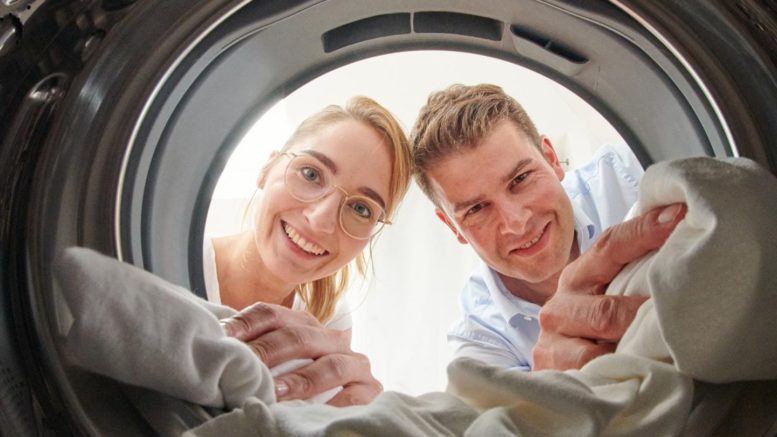 This was investigated by Dr. Ricarda Schmithausen and Dr. Daniel Exner from the University Hospital Bonn. Courtesy of Volker Lannert/Uni Bonn

For the first time ever, investigators have identified a washing machine as a reservoir of multidrug-resistant pathogens. The pathogens, a single clone of Klebsiella oxytoca, were transmitted repeatedly to newborns in a neonatal intensive care unit at a German children's hospital. The transmission was stopped only when the washing machine was removed from the hospital. The research is published this week in Applied and Environmental Microbiology, a journal of the American Society for Microbiology.

"This is a highly unusual case for a hospital, in that it involved a household type washing machine," said first author Ricarda M. Schmithausen, PhD. Hospitals normally use special washing machines and laundry processes that wash at high temperatures and with disinfectants, according to the German hospital hygiene guidelines, or they use designated external laundries.

The research has implications for household use of washers, said Schmithausen, senior physician at the Institute for Hygiene and Public Health, WHO Collaboration Center, University Hospital, University of Bonn, Germany. Water temperatures used in home washers have been declining, to save energy, to well below 60°C (140°F), rendering them less lethal to pathogens. Resistance genes, as well as different microorganisms, can persist in domestic washing machines at those reduced temperatures, according to the report.

"If elderly people requiring nursing care with open wounds or bladder catheters, or younger people with suppurating injuries or infections live in the household, laundry should be washed at higher temperatures, or with efficient disinfectants, to avoid transmission of dangerous pathogens," said Martin Exner, MD, chairman and director of the Institute for Hygiene and Public Health, WHO Collaboration Center, University Hospital/University of Bonn. "This is a growing challenge for hygienists, as the number of people receiving nursing care from family members is constantly increasing."

At the hospital where the washing machine transmitted K. oxytoca, standard screening procedures revealed the presence of the pathogens on infants in the ICU. The researchers ultimately traced the source of the pathogens to the washing machine, after they had failed to find contamination in the incubators or to find carriers among healthcare workers who came into contact with the infants.

The newborns were in the ICU due mostly to premature birth or unrelated infection.The clothes that transmitted K. oxytoca from the washer to the infants were knitted caps and socks to help keep them warm in incubators, as newborns can quickly become cold, even in incubators, said Dr. Exner.

The investigators assume that the pathogens "were disseminated to the clothing after the washing process, via residual water on the rubber mantle [of the washer] and/or via the final rinsing process, which ran unheated and detergent-free water through the detergent compartment," implicating the design of the washers, as well as the low heat, according to the report. The study implies that changes in washing machine design and processing are required to prevent the accumulation of residual water where microbial growth can occur and contaminate clothes.

However, it still remains unclear how, and via what source the pathogens got into the washing machine.

The infants in the intensive care units (ICU) were colonized, but not infected by K. oxytoca. Colonization means that pathogens are harmlessly present, either because they have not yet invaded tissues where they can cause disease, or because the immune system is effectively repelling them.

The type of multidrug resistance in the K. oxytoca is caused by extended spectrum beta-lactamases (ESBL). These enzymes disable antibiotics called beta lactams. The most common types of bacteria producing ESBLs are Escherichia coli, and bacteria from the genus Klebsiella.