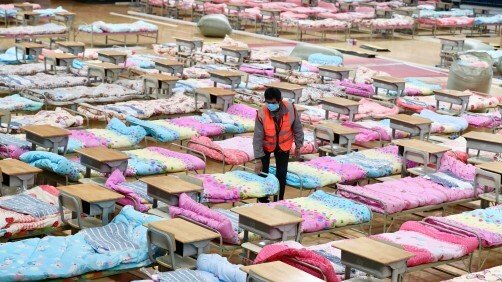 As part of a massive countrywide response to the new coronavirus outbreak, a worker sets up beds at the Hongshan Stadium during its conversion into a makeshift hospital in Wuhan, China on Feb 4, 2020. Courtesy of REUTERS/China Daily

The following is a commentary from Yanzhong Huang, an associate professor at the John C. Whitehead School of Diplomacy and International Relations, Seton Hall University, and a senior fellow for Global Health at the Council on Foreign Relations:

"The new coronavirus is still spreading rapidly, in and out of China. By January 31, barely a month after the new pathogen’s appearance on the world stage, already 62 countries had imposed restrictions on the entry of Chinese citizens.

"Against the World Health Organization’s recommendations, China’s neighbors, including North Korea, Mongolia, and Russia rushed to close their land borders with China, while the United States and Australia have shut down all borders to Chinese arrivals.

"In Hong Kong, chief executive Carrie Lam’s decision not to fully shut the border with the mainland just gave another reason for the people to be angry at the government, as thousands of healthcare workers staged a strike to demand full border closure. Many countries evacuated their citizens from China. Airlines in Europe, North America, and Asia are cancelling their flights to the country. Italy (with only two confirmed cases) and the United States (with 11 confirmed cases as of February 3) have declared public health emergencies over the virus. Russia went as far as to indicate that it would deport foreigners infected with the virus. More are expected to follow suit in the coming days.

"The international responses make the urgent request from China’s U.N. ambassador for more medical supplies to help the country fight the virus look so pale and helpless. And on February 2, former Vice President Joe Biden criticized President Donald J. Trump’s response to the outbreak by saying, “This is no time for hysterical xenophobia and fearmongering.”

"To be fair, the rapid spread of the virus poses an immediate and present threat that justifies actions outside the normal bounds of political procedure. Emergency measures have helped mobilize political leadership and resources to address the challenges. But in the meantime, responses driven by fear may create many more problems than they could solve.

"First, they may complicate risk management by overestimating the danger of the coronavirus. The outbreak has hit the headlines, but the aggregate risk to human health may not be as high as all the attention would seem to indicate. As of February 4, more than 20,000 cases have been identified, including 427 deaths, almost all of which occurred in China. In contrast, as of January 18, the first few months of the flu season has witnessed 15 million cases of flu and 8,200 deaths worldwide. Yet it was the coronavirus that has elicited a high level of fear and panic. Such “dreaded risks,” according to author and global security expert Jessica Stern, reduces the ability of policymakers to make accurate trade-offs between mundane but widespread risks and those that are high-profile but not so common.

"Second, they may lead to unnecessary social distancing measures, fueling exclusionary and dehumanizing responses against certain population groups. In China, panic over the virus has led people to shun outsiders, especially those from Wuhan, which is believed to be ground zero for the virus. Internationally, the fear has triggered anti-Chinese sentiment in some Asian countries. Xenophobically treating sick or exposed people, as opposed to the virus, as the enemy only complicates the crisis.

"Third, effective public health policy must be built on trust, not fear. Fear and panic spawned by extraordinary government measures may have the unintended effect of creating a less cooperative society by encouraging people to shun public health workers or officials. In an era of internet and social media, the fear of the virus may spread faster than the virus itself, which only undermines effectiveness of government response. On January 23 alone, more than 300,000 people reportedly left Wuhan by train in the hours before the quarantine—announced at 2:00 a.m.—took effect at 10:00 a.m., increasing the possibility of disease spread. Those who stayed and developed flu-like symptoms then flooded the hospitals to seek medical assistance, completely overwhelming the city’s healthcare institutions.

"Fourth, responses informed by fear can cause huge damage to world economy. In order to minimize chances of getting infected, people would refrain from spending on current items, such as travelling or going to restaurants and theaters. Economic damage can be sustained because many measures instituted in the outbreak (e.g., cancelling flights or shutting down borders) tend to be “sticky” and not so easy to rescind. China, for example, did not lift its ban on pork product from Canada until November 2009, four months after the H1N1 swine flu activity declined in most countries. According to a World Bank estimate, 90 percent of economic losses during any disease outbreak are caused by “uncoordinated and irrational efforts of the public to avoid infection.”

"Finally, fear of an imminent threat provokes a competitive rush among governments worldwide to institute pharmaceutical or nonpharmaceutical countermeasures, making effective international collaboration difficult. The appeal to public health emergencies, for example, may relieve a country of any moral obligation to help other countries, especially those with low response capacities, which may in turn provide disincentives to those countries in supporting existing international health norms such as sharing disease information obliged by International Health Regulation

"Given the downside risks associated with the fear factor, it is imperative to ensure the revulsion invoked by the outbreak does not push us to undertake measures with unacceptable adverse impacts on public health, civil liberties, trade and economy. Rather than focus solely on emergency mobilization, it is equally important to emphasize prevention, precaution, and risk management by politically neutral professionals. Instead of provoking fear and panic, governments should provide the public with a more balanced picture of the nature and spread of the virus. Countries rolling out emergency measures are also advised to prepare an exit strategy that focuses on mitigation to minimize their potential damage to the economy and society. Equally important, the World Health Organization to should demonstrate its leadership in coordinating global response after declaring the Public Health Emergency of International Concern last week."