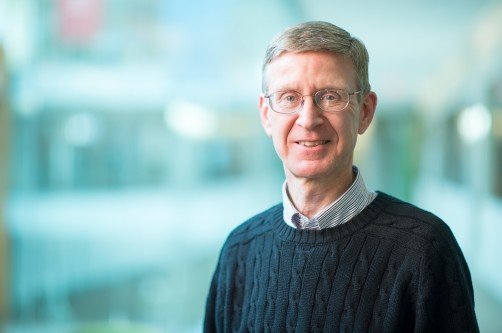 Paul Ahlquist, virology investigator at the Morgridge Institute for Research.

Even after heroic medical and societal efforts finally break the back of the current COVID-19 pandemic, the global sigh of relief may not last long. The chilling reality is that viral threats are growing more common. And they’re getting deadlier.

Those threats underscore the need for dramatic new approaches to fighting viruses, says Paul Ahlquist, lead investigator for the John W. and Jeanne M. Rowe Center for Virology Research at the Madison-based Morgridge Institute for Research. The ultimate goal of the Ahlquist Lab is to gain a fundamental understanding of how viruses work, to produce new ways to arrest their spread and potentially to prevent or more quickly quell future pandemics.

Given the death toll and multi-trillion dollar costs of COVID-19, it’s not hyperbole to suggest that an effort on the scale of the Space Race is needed and merited to break the cycle of viral pandemics, says Ahlquist, also a professor of oncology and molecular virology at the University of Wisconsin-Madison and Howard Hughes Medical Institute scientist.

“This is a defining moment,” Ahlquist says of the current pandemic. “Hopefully there will be a similarly transformational response to address these viral risks, since there is every expectation that this will happen again. The occurrence of problematic pandemics like this, with increasing frequency, has been predicted by leading authorities for many years. This is a continuing threat, not just a once in a millennium occurrence.”

The COVID-19 virus is the third world-impacting coronavirus outbreak to strike humans in the past 20 years. The past decade has also seen severe outbreaks of Ebola, Zika, avian influenza, chikungunya, and other threatening viruses. And we’re only four decades removed from the emergence of the still raging global HIV/AIDS epidemic that has killed more than 30 million people. Ahlquist notes that multiple other animal viruses have recently spilled over into humans and caused high mortality, but that we escaped “by the skin of our teeth” because initial human-to-human transmission has been poor.

The Ahlquist lab is looking for longer-term answers by deciphering the molecular mechanisms by which viruses replicate and spread, to identify their vulnerabilities. For example, viruses are genetically simple organisms that rely almost entirely on more complicated host cells to reproduce. A typical virus may have only about 10 genes, but humans have around 30,000 genes, and a surprising number of those are exploited by viruses for their multiplication.

Using modern genetic techniques, Ahlquist’s group and others have systematically identified numerous cellular genes that are used by viruses to replicate. In earlier studies, the Ahlquist lab and their collaborators identified over 100 cellular genes required for influenza virus replication. In particular, certain host genetic pathways that are used by many viruses might, with further understanding, serve as targets to interfere with large swaths of viruses.

That would be a game-changer for fighting viruses, Ahlquist says. Rather than “one virus, one drug,” they are looking to develop broad-spectrum antivirals that could work more like a general antibiotic. One dream would be developing treatments that might contain a combination of antiviral agents that inhibit a certain family or class of viruses, such as coronaviruses.

In spite of these promising early efforts, Ahlquist emphasizes that our understanding of viruses is in its infancy.

“We’ve got to get to know the enemy,” says Ahlquist. “Our recent work on one crucial class of viral processes is akin to, for the first time, taking the cover off a machine and seeing the inner workings. It would be ridiculous to imagine that we could figure out in an effective, timely fashion how to control these complex diseases without more basic understanding.”

Global population trends are making animal-to-human viral spillovers far more common. As we expand into more forests and other natural territories, the level of contact of humans and livestock with wild animals and their numerous viral diseases greatly increases. As those viruses come into repeated contact with humans, they use their tremendous mutational capacities to attempt to adapt, survive and spread in and between humans. So far, the vast majority of viruses have failed to make that zoonotic leap, but the growing number that do wreak incredible havoc.

The move to an urban society has also increased the threat.

“Imagine that a new virus arises that is just starting to learn to spread between people,” Ahlquist says. “If that virus emerged in the 1800s on a rural farm, everybody is already socially distanced. It might infect one farmstead and one family, but not have a very good chance of spreading further. If such a virus arose today, in the middle or even the outskirts of Mumbai or LA, it’s going to spread and adapt further, and nothing is going to stop it.”

Global travel and commerce further raise the stakes of transmission. Ahlquist notes that the 1918 influenza pandemic spread to the majority of the world in just months, when the fastest form of travel was the steam ship.

These accelerating dangers, on top of the human and economic costs of COVID-19, all point to the real need for deeper investment into fundamental research on viral diseases and their control to produce better ways to protect ourselves from pandemics, Ahlquist says.

Addressing the immediate and devastating impacts of COVID-19 is without question the top priority, Ahlquist says. But in the longer term, a greater national investment in virology research could have a massive payoff in reducing the existential threats of viral outbreaks.

“We’ve learned a lot, but our knowledge is also still very primitive,” Ahlquist says. “Every month new breakthroughs are published where people say, ‘Wow! How could we not have known this? And how could we have ever thought we could understand x without knowing this?’ There’s a huge need, but also a huge and growing opportunity, in that we’ve learned enough to advance further in increasingly powerful ways. So we can be very confident that investments in these critical arenas will pay off handsomely for society.”