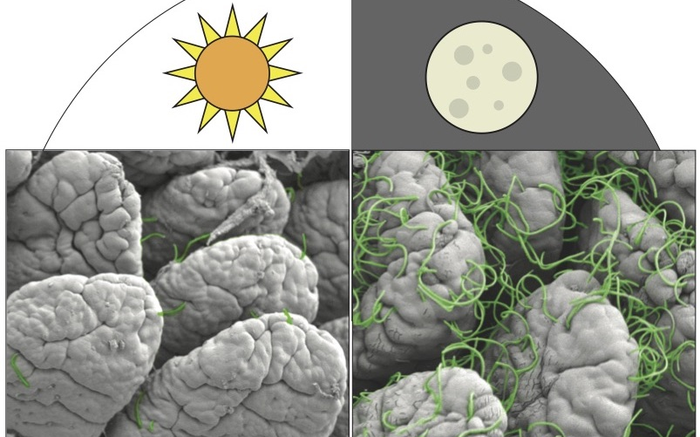 The body’s ability to prevent food poisoning by producing a natural antimicrobial compound increases during the day, when exposure to noxious bacteria is most likely, a new study by UT Southwestern scientists suggests. The findings, published online in Cell, could eventually lead to timed therapies and vaccination regimens designed to maximize this immune response.

“This study shows that our immune systems are not turned on all the time, which is an unexpected result,” says study leader John F. Brooks II, PhD, a postdoctoral fellow in the laboratory of Lora Hooper, PhD, study co-leader and professor of immunology and microbiology at UTSW. “Our findings suggest that there are peak times in which the body is more primed to fight infections.”

Researchers have long known that virtually all animals follow circadian cycles that are tied to sunrise and sunset. These cycles allow animals to anticipate and prepare for changes in their environment. Disrupting circadian rhythms can have serious health consequences; for example, chronic sleep disruption is related to increased intestinal infection in humans. However, why this occurs has been unclear.

Brooks, Hooper, and their colleagues suspected that antibacterial immunity might change in the intestines on a circadian cycle. To investigate this idea, the researchers looked for rhythms in the expression of natural antimicrobial agents produced in the gut of mice to fight foodborne illness. The researchers saw that in normal lab mice, one of these antimicrobial molecules – known as regenerating islet-derived protein 3g (REG3G) – was more abundant at night, when these nocturnal animals are active, and less so during the day, when mice sleep. However, in mice raised to have no gut bacteria, REG3G was essentially absent throughout both the day and the night.

Searching for the microbial components driving the rhythmic pattern, the researchers found that mice with cycling amounts of REG3G had large resident populations of segmented filamentous bacteria in their guts – microbes typically present in rodents, nonhuman primates, and humans – that have a unique ability to attach to the intestinal lining and change their hosts’ gene activity. Further experiments showed that these bacteria attached to the animals’ intestinal lining during feeding, probably to siphon off nutrients. When they attached, REG3G production ramped up in the intestines.

This cycling had significant consequences for the ability of mice to fight off infection. When the researchers infected normal mice with bacteria, the animals had higher bacterial burdens and rates of death if they were exposed at sunset than at sunrise. Mice that can’t make antimicrobial proteins, including REG3G, had similarly high rates of bacterial burden and death regardless of when they were infected.

“These results make me think twice about waking up in the middle of the night and raiding the refrigerator,” Hooper says. “It may be more dangerous to eat bacteria-laden potato salad when your gut defenses are lowest.”

Other UTSW researchers who contributed to this study include Cassie L. Behrendt, Kelly A. Ruhn, Syann Lee, Prithvi Raj, and Joseph S. Takahashi.

This work was supported by grants from the National Institutes of Health (R01 DK070855), The Welch Foundation (I-1874), and the Walter M. and Helen D. Bader Center for Research on Arthritis and Autoimmune Diseases.

Hooper holds the Jonathan W. Uhr, MD, Distinguished Chair in Immunology, the Nancy Cain and Jeffrey A. Marcus Scholar in Medical Research, in Honor of Dr. Bill S. Vowell, and is an investigator of the Howard Hughes Medical Institute.

Takahashi holds the Loyd B. Sands Distinguished Chair in Neuroscience and is an investigator of the Howard Hughes Medical Institute.

Brooks is a recipient of the Howard Hughes Medical Institute Hanna Gray Fellowship.