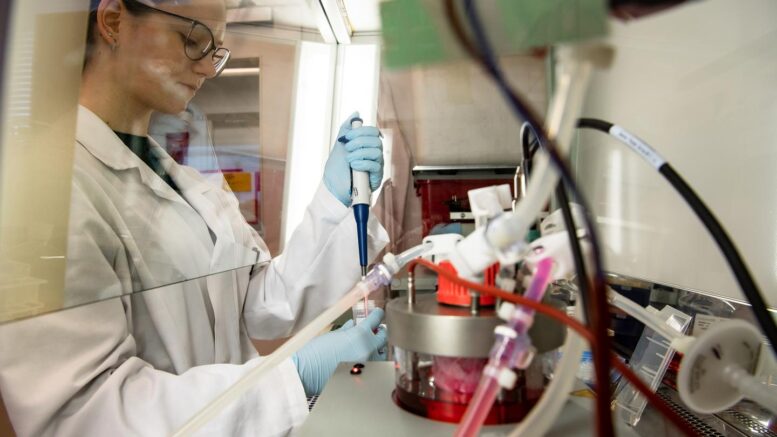 A vaccine produced in a bioreactor goes under further processing in a sterile laminar flow cabinet. The photo is from the National Virus Vector Laboratory at the A.I. Virtanen Institute for Molecular Sciences in the University of Eastern Finland. Courtesy of UEF/Raija Törrönen

Rokote Laboratories Finland Ltd., a newly founded academic spin-out based in Finland is working to develop and introduce to the markets a nasal spray vaccine against COVID. The vaccine is based on research carried out at the University of Helsinki and the University of Eastern Finland.

The vaccine uses gene transfer technology developed at the University of Eastern Finland by professor Seppo Ylä-Herttuala's research group, and the technology has already been successfully used in several clinical trials using gene therapy to treat cardiovascular diseases and cancer. The vaccine uses a safe adenovirus carrier that contains a cloned DNA strand, which causes nasopharyngeal cells to produce the virus protein which, in turn, produces a response to the vaccine. There is no actual SARS-CoV-2 virus in the vaccine. Preliminary results show that the vaccine has performed well in animal studies, and clinical testing in humans will start within a few months.

Nasal delivery was chosen as the new vaccine's method of administration because the virus is also naturally transmitted through the airways. Indeed, nasal administration seems to induce a wider immune response than intramuscular administration.

"Vaccines injected intramuscularly produce IgG antibodies in the bloodstream, but nasal vaccines also produce an IgA response that protects mucous membranes. We assume that this can also prevent those who have received the vaccine from transmitting the virus," Ylä-Herttuala says.

According to him, the currently ongoing vaccination programs do not eliminate the need for new vaccines, as new variants are expected to cause new waves of infection.

"Even if we were able to vaccinate the entire population, at least people in medical risk groups will still need new vaccines against new variants in the upcoming years. The vaccines currently in use provide a clearly lower protection against the South African variant, which will likely be the dominant virus in the next wave. Our vaccine already takes into account the most important variants, i.e. the South African, Brazilian and the UK one. There will certainly be a demand for this type of vaccine," says professor of virology Kalle Saksela from the University of Helsinki.

The company will carry out the first clinical vaccine trials in Finland. In Kuopio, there is already the commercial technology needed to produce the vaccine.

According to Kemppainen, the company is now negotiating on funding to ensure further development of the vaccine and its moving towards clinical trials. After being granted a marketing authorization, the vaccine could ensure Finnish and European security of supply, and vaccine self-sufficiency.