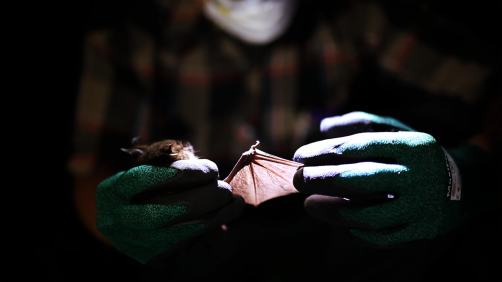 Andrew Bennett, a former graduate student in the lab of Tony Goldberg, UW–Madison professor of epidemiology in the School of Veterinary Medicine, holds a cyclops leaf-nosed bat during field work in Uganda’s Kibale National Park, in search of viruses carried by the animals. Bennett was part of an international team that just described the first two relatives of rubella virus ever found. Courtesy of Emily Julka

At night in a Ugandan forest, a team of American and African scientists take oral swabs from insect-eating cyclops leaf-nosed bats.

In a necropsy room near the Baltic Sea, researchers try to determine what killed a donkey, a Bennett’s tree-kangaroo and a capybara at a German zoo — all of them suffering from severe brain swelling.

Neither team was aware of the other, yet they were both about to converge on a discovery that would forever link them — and help solve a long-enduring mystery. They were each about to find two new relatives of the rubella virus, which had been, since it was first identified in 1962, the only known member of its virus family, Matonaviridae.

In Africa, this relative is ruhugu virus, named for the place where it was found, Ruteete Subcounty, and the word in the local Tooro language that describes the flapping of bat wings in the hollow of a tree: obuhuguhugu. The virus found in Germany, slightly different from rubella and ruhugu, is rustrela, named for the nearby Strela Sound.

The two teams have now collaborated to publish their findings today [Oct. 7] in Nature. They describe the new viruses, their similarities to rubella virus, and their differences. Neither of the new viruses are known to infect people.

“Why has it been so challenging to track down the origins or relatives of rubella virus?” asks Tony Goldberg, a University of Wisconsin–Madison professor of epidemiology at the School of Veterinary Medicine, who led the American efforts. “Why did it take 206 years from the time George Maton first described rubella, and why did two teams working independently figure it out within three months of each other, get lucky enough to learn of one another’s results, and then lucky enough to work together to publish?”

It isn’t because people haven’t tried, Goldberg says. It may be that advancing technology has made it easier — rubella virus genomes are notoriously difficult to work with, and the new viruses share these characteristics.

It may just be serendipity.

Goldberg’s team — whose efforts in the new study were led by his former graduate student Andrew Bennett — wasn’t even looking for rubella-like viruses. They were, pre-COVID-19 pandemic, working with their Ugandan colleagues to look for coronaviruses carried by bats. Ruhugu virus popped up as a strange string of letters in the giant analyses of genetic code the team was performing on samples collected from the bats.

When they looked closer, they saw that it was quite similar to rubella virus, just one short word, or amino acid, different in a key region of the genome that lets viruses bind to host cells. (Rustrela virus has a few more amino acid differences.) The researchers are currently working to further study both viruses in the lab.

Rubella is an airborne virus that has largely been eradicated thanks to an effective vaccine, though pockets of disease still exist throughout the world. It can cause rash and flu-like symptoms. During pregnancy, the virus can cause miscarriage, stillbirth or fetal development defects — as many as 100,000 children each year are born with congenital rubella syndrome and may be deaf, blind or experience heart problems.

Rubella has not been found in animals, which has made it easier for the World Health Organization to target elimination of the virus. However, both of the new viruses have been found in common mammal species in Uganda and in Germany (researchers have found rustrela virus in yellow-necked field mice). Up to half of the bats and half of the mice tested were carriers of their respective viruses. This suggests both species may act as viral reservoirs, carrying and transmitting pathogens without getting sick.

The study also indicates that rubella, like many other human viruses, probably originated in animals. Researchers do not know whether rubella virus can jump back into animals.

“There is no evidence that ruhugu virus or rustrela virus can infect people, yet if they could, it might be so consequential that we should consider the possibility,” Goldberg says. “We know that in Germany, rustrela virus jumped among species that are not at all closely related. If either of these viruses turns out to be zoonotic, or if rubella virus can go back into animals, that would be a game changer for rubella eradication.”

The team’s analysis suggests the three viruses may be similar enough that the current rubella vaccine could be effective against all of them — a key question for research going forward, says Goldberg, also a member of the UW–Madison Global Health Institute.

The new viruses also provide scientists with new tools to probe the biology of rubella virus and the Matonaviridae family. There are no good animal models for rubella, but rustrela virus provides a new opportunity to explore one. Mice are common model species in the laboratory.

Additionally, the findings reinforce the critical importance of conservation efforts in Uganda to protect forests from encroaching development, and the important work scientists and others there are undertaking to study the effects of a changing environment on human and animal diseases.

For instance, Deputy Director of Field Operations for the Uganda Wildlife Authority Charles Tumwesigye says the study’s findings will be incorporated into UWA’s community conservation awareness programs, especially around Kibale National Park, where the ruhugu virus was found.

The study “will help management to further protect unique aspects of the ecosystem as well as keep the population safe,” he says. “Uganda Wildlife Authority values scientific research because it provides key information for decision-making in protected area management.”

Tumwesigye adds that the ways in which people and wildlife relate are “key to harmonious co-existence … When communities around Kibale National Park appreciate the value of the bats, for example, they become supportive in their conservation initiatives and learn how to protect themselves.”

If not for the country’s “long history of excellent medical and conservation science,” says Goldberg, “there might have been no bats to study.”

Protecting habitat is of utmost importance to animals and to people, he adds.

“Viruses stay in their place when ecosystems are intact.”

Adrian Paskey, from Uniformed Services University of the Health Sciences, and Arnt Ebinger are co-lead authors of the study with Bennett, who is now employed as a scientist for the Naval Medical Research Center. Goldberg is co-corresponding author along with Martin Beer, from the Institute of Diagnostic Virology at the Friedrich-Loeffler-Institut in Germany. The study includes additional coauthors from the Friedrich-Loeffler-Institut; the Naval Medical Research Center; the State Office for Agriculture, Food Safety and Fisheries in Western Pomerania, Germany; and the German Center for Infection Research.

The study was supported by the U.S. National Institute of Allergy and Infectious Diseases (T32 AI078985 and GEIS P0062_20_NM_06), and by the German Federal Ministry of Education and Research (01KI1722A). It was also supported through an NIAID contract with Laulima Government Solutions, LLC (HHSN272201800013C) and a former NIAID contract with Battelle Memorial Institute (HHSN2722007000161). Additional support came from the German Center for Infection Research and the UW–Madison Global Health Institute, the Institute for Regional and International Studies, and the John G. MacArthur Professorship Chair.