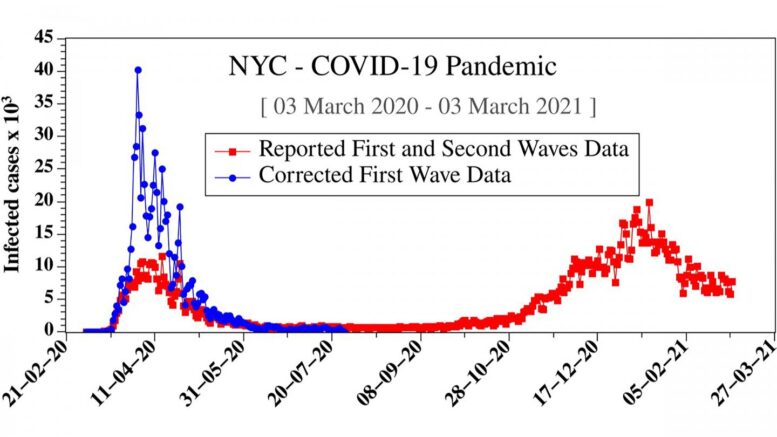 "We integrated a new physics-based relationship into a pandemic forecast model that accurately predicted, as it was later observed, a second COVID-19 pandemic wave within many cities around the world, including New York," said Drikakis.

Most, if not all, of the data for the daily number of total new infections reported during the first wave of the pandemic were underestimated and used incorrectly.

"Within the city of New York, our work shows that the daily number of new infections reported during the first wave was underestimated by a factor of four," Dbouk said. "So, the uncertainty of first-wave data mixed with second-wave data means the general conclusions drawn can be misleading, and everyone should be aware of this."

The researchers' work is the first known case of deriving an advanced uncertainty quantification model for the infected cases of the pandemic's first wave based on fluid dynamic simulations of weather effects.

In the future, the researchers' proposed uncertainty quantification model may help correct the worldwide total number of daily coronavirus infections reported by many cities during the first wave of a pandemic.

The article, "Correcting pandemic data analysis through environmental fluid dynamics," is authored by Talib Dbouk and Dimitris Drikakis. It will appear in Physics of Fluids on June 22, 2021 at: https://aip.scitation.org/doi/10.1063/5.0055299