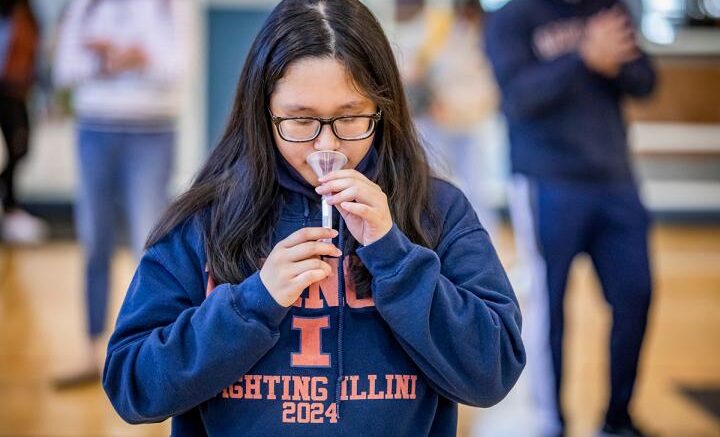 COVID-19 testing works best when administered multiple times per week as part of a routine screening program, such as the SHIELD Illinois saliva-testing protocol, a new study found. Courtesy of Fred Zwicky, University of Illinois

The chance of detecting the virus that causes COVID-19 increases with more frequent testing, no matter the type of test, a new study found. Both polymerase chain reaction and antigen tests, paired with rapid results reporting, can achieve 98% sensitivity if deployed at least every three days.

"This study shows that frequent testing can be really effective at catching COVID-19 infections and potentially blocking transmission," said study leader Christopher Brooke, a virologist and professor of microbiology at the University of Illinois Urbana-Champaign. "There are many places where vaccination is not yet widespread. With the rise of variants, testing remains an important tool for blocking the spread of the virus."

Part of the Rapid Acceleration of Diagnostics Tech program of the National Institutes of Health, the study brought together researchers at Illinois; the University of Massachusetts Medical School, Worcester; Johns Hopkins School of Medicine, Baltimore; and the NIH National Institute of Biomedical Imaging and Bioengineering. The researchers published their results in the Journal of Infectious Diseases.

Students and employees at the U. of I. who had tested positive for COVID-19 or were identified as close contacts of a person who tested positive were invited to participate. Because of the SHIELD Illinois screening program, which required students and employees to take multiple saliva-based tests each week and returned results in less than 24 hours, the university provided an ideal location for identifying cases before they became symptomatic, the researchers said.

The 43 study participants received three tests daily for 14 days: a PCR nasal swab, a PCR saliva test and an antigen nasal swab. The results of each were compared with live viral cultures taken from the PCR nasal swab, which show when a person is actively infectious. The study also examined how the frequency of testing affected each method's efficacy at detecting an infection.

"Different tests have different advantages and limitations. Antigen tests are fast and cheap, but they are not as sensitive as PCR tests. PCR are the gold standard, but they take some time to return results and are more expensive," said Rebecca Lee Smith, a professor of epidemiology at Illinois and the first author of the study. "This study was to show, based on real data, which test is best under which circumstances and for what purpose."

The results showed that the PCR tests - particularly saliva-based ones - were best at detecting cases before the person had an infectious viral load, a key to isolating individuals before they can spread the virus, Smith said. For all three methods, testing every three days had 98% sensitivity to detecting infection.

If that testing frequency declined to once a week, the PCR methods maintained their high sensitivity but the antigen tests dropped to around 80%. That means organizations that wish to deploy antigen testing as part of a reopening strategy or individuals who wish to monitor their status at home should use antigen tests multiple times each week to achieve similar results to PCR testing, the researchers said.

"This work also shows how the PCR and antigen tests could be used in combination," Smith said. "For example, I work with a lot of school districts, helping them to plan for fall, since vaccines are not yet available to those under 12 years old. If a student had a known exposure or comes to school symptomatic, give them both tests. Antigen tests are really good at finding those highly infectious people, so that can tell administrators right away if the child needs to be sent home, rather than waiting 24 hours for PCR results. If the antigen test is negative, the PCR test is a backup, as it may detect the infection earlier than an antigen test would, before the student becomes contagious."

The results of the study helped inform the U.S. Food and Drug Administration's recommendations and instructions on how to use at-home antigen tests that recently received emergency use authorization. The researchers said they hope the results assist schools, businesses and other organizations as they reopen.

"If you are in a situation where you have the resources and capacity to do large-scale PCR testing with rapid results reporting like we did here at Illinois, you can identify infections early and potentially isolate people before they become contagious," Brooke said. "In places where PCR testing is not readily available or rapid results reporting is not possible, but the cheaper and more rapid tests are available, our data show how those tests can be deployed in a way that can increase their sensitivity - through repeated serial testing, ideally three times a week or more."