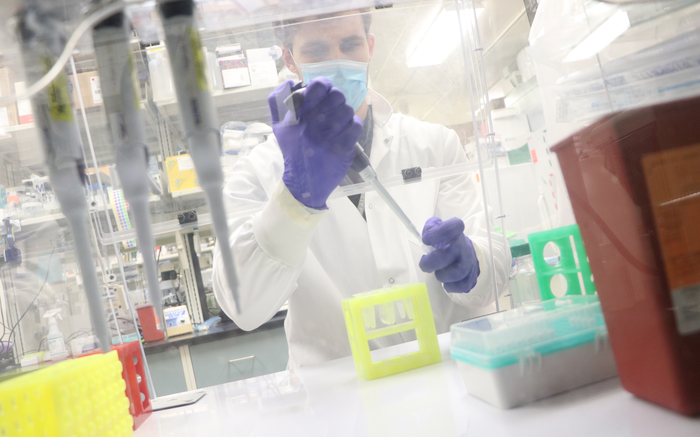 New research sheds light on the origins of a 2012 Bundibugyo virus disease outbreak in the Democratic Republic of the Congo, according to a report published online this week in the journal Cell Reports Medicine. The work also demonstrates the importance of using high throughput sequencing to understand virus “spillover” events in order to more effectively manage disease outbreaks.

In the study, an international team led by the U.S. Army Medical Research Institute of Infectious Diseases demonstrates how high throughput sequencing—one of USAMRIID’s core competencies—can be used retrospectively to pinpoint the origins of a disease outbreak and provide key information about emerging pathogens of military and public health importance.

Bundibugyo virus is one of four ebolaviruses known to cause human disease, and multiple outbreaks have occurred on the African continent. It is characterized by flu-like symptoms that are sometimes followed by diarrhea, vomiting, chest pain, and hemorrhage. Survivors may suffer from joint pain, blurred vision and hearing loss.

As is the case with other ebolaviruses, the “reservoir” of Bundibugyo—meaning the primary host that harbors the virus—remains unknown, according to the authors. Thus, the ecology of the virus and its transmission mechanism into the human population are poorly understood.

The 2012 outbreak resulted in 38 laboratory-confirmed cases of human infection, 13 of whom died. However, only 4 patient specimens from that outbreak had been sequenced until now, according to Maj. Jeffrey R. Kugelman, PhD, one of the study’s lead authors.

USAMRIID’s analysis of sequences from seven additional patients shows that multiple virus “spillover” events contributed to the outbreak—not a single event, as previously described—and that one of the spillover events likely occurred weeks earlier than previously thought.

“Analysis of the molecular epidemiology and evolutionary dynamics of the 2012 outbreak with these additional isolates challenges the current hypothesis that the outbreak was the result of a single spillover event,” said Maj. Christine Hulseberg, PhD, the paper’s first author. “In addition, phylogenetic analysis suggests that the initial emergence of the virus occurred 50 days earlier than previously accepted.”

In addition to playing a key role in identifying chains of transmission as an outbreak unfolds, viral genome sequencing helps scientists to better understand general patterns of spread, and informs public health efforts to control future outbreaks. It also allows for examination of genetic mutations that may affect the ability of the virus to survive and cause disease.

This study was conducted at USAMRIID as part of an ongoing Ebola virus response and surveillance effort under the project, “Assessment of Human Clinical Samples from Viral Hemorrhagic Fevers of Known and Unknown Etiology.” It is also among the first of several planned collaborations with the Icahn School of Medicine at Mount Sinai, New York, laying a foundation for future joint research initiatives to protect national and global public health. USAMRIID’s partnership with ISMMS is designed to maximize the impact of DoD’s research, development, and testing and evaluation investment by ensuring integration and cooperation with biomedical infectious disease research centers with similar goals.