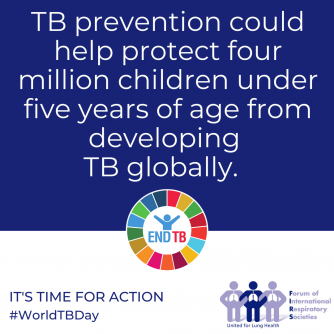 In support of World TB Day today, March 24, the Forum of International Respiratory Societies (FIRS), of which the American Thoracic Society is a founding member, joins the World Health Organization campaign urging governments to act on the commitments made to end TB.

TB remains one of the world’s deadliest infectious killers. According to the WHO each day, nearly 4000 lose their lives to TB and close to 28,000 people fall ill with this preventable and curable disease. This equates to 1.5 million deaths and 10 million people falling ill to TB each year.

Despite significant progress against TB in recent years, 3 million people with TB disease are still undiagnosed. One in three people with TB do not access quality care for reasons ranging from gaps in research and development and insufficient or underfunded health services, to long and difficult treatments or because of stigma. In addition, a quarter of the world’s population is estimated to be living with TB infection, the bacteria that causes the disease. People with TB infection are estimated to have a 5-10 percent chance of developing the disease over their lifetime but TB preventive therapy reduces a person’s risk of developing active TB by 60 to 90 percent.

To achieve the Sustainable Development Goals targets and the United Nations High-Level Meeting commitments by 2030 and 2022 respectively, governments must accelerate their investments and actions to ensure access to quality TB prevention and care.

“The rapid development and deployment of efficacious COVID vaccines represents a triumph of integrated scientific, private and public partnership,” said David Lewinsohn, MD, PhD, of the American Thoracic Society. “TB elimination in high income countries reflected these coordinated efforts. We now need equal urgency in the settings where TB prevention and treatment is most needed.”

FIRS calls for urgent action to advance TB prevention through rapid scale up of access to preventive treatment for TB infection for those most at risk of falling ill of TB including:

“Time is running out. Globally, we are falling short of the target to provide at least 30 million people with TB preventive treatment by 2022,” said Mark Cohen, president of FIRS. “We are at a critical time, as we continue to battle the COVID-19 pandemic, we cannot put End TB progress at risk.”

The COVID-19 pandemic has made the world aware of how deadly respiratory viruses can be. We have seen how public health and political will can be mobilized quickly and it’s time for us to treat TB as the emergency that it is.