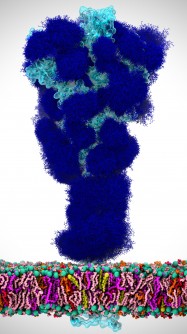 As the COVID-19 pandemic rages on, researchers are working overtime to develop vaccines and therapies to thwart SARS-CoV-2, the virus responsible for the disease Many efforts focus on the coronavirus spike protein, which binds the angiotensin-converting enzyme 2 (ACE2) on human cells to allow viral entry. Now, researchers reporting in ACS Central Science have uncovered an active role for glycans –– sugar molecules that can decorate proteins –– in this process, suggesting targets for vaccines and therapies.

To find out, the researchers used structural and glycomic data to build molecular dynamics simulations of the SARS-CoV-2 spike protein embedded in the viral membrane. The computer models, which presented a detailed snapshot of every atom in the spike glycoprotein, revealed that N-glycans linked to the spike protein at certain sites (N165 and N234) helped stabilize the shape change that exposes the RBD, which could help promote infection. The simulations also identified regions of the spike protein that weren’t coated by glycans and thus could be vulnerable to antibodies, especially after the shape change. In laboratory experiments using biolayer interferometry, the team showed that mutating the spike protein so that it no longer had glycans at N165 and N234 reduced binding to ACE2. These results lay the foundation for new strategies to fight the pandemic threat, the researchers say.