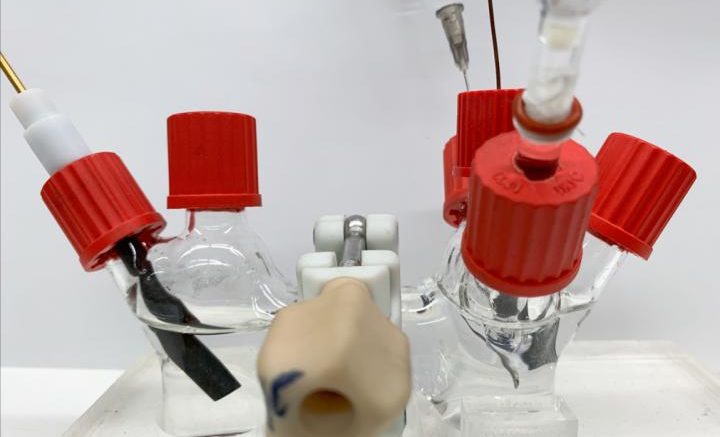 A team of researchers has developed a portable, more environmentally friendly method to produce hydrogen peroxide. It could enable hospitals to make their own supply of the disinfectant on demand and at lower cost.

Hydrogen peroxide has recently made headlines as researchers and medical centers around the country have been testing its viability in decontaminating N95 masks to deal with shortages amid the COVID-19 pandemic.

While results so far are promising, some researchers worry that the chemical's poor shelf life could make such decontamination efforts costly.

The main problem is that hydrogen peroxide is not stable; it starts breaking down into water and oxygen even before the bottle has been opened. It breaks down even more rapidly once it is exposed to air or light.

"You maybe only have just a couple of months to use it before it expires, so you would have to order batches more frequently to keep a fresh supply," said UC San Diego nanoengineering professor Zheng Chen. "And because it decomposes so quickly, shipping and storing it become very expensive."

Chen and colleagues developed a quick, simple and inexpensive method to generate hydrogen peroxide in house using just a small flask, air, an off-the-shelf electrolyte, a catalyst and electricity.

"Our goal is to create a portable setup that can be simply plugged in so that hospitals, and even households, have a way to generate hydrogen peroxide on demand," Chen said. "No need to ship it, no need to store it, and no rush to use it all before it expires. This could save up to 50 percent to 70 percent in costs."

Another advantage is that the method is less toxic than industrial processes.

The method is based on a chemical reaction in which one molecule of oxygen combines with two electrons and two protons in an acidic electrolyte solution to produce hydrogen peroxide. This type of reaction is known as the two-electron oxygen reduction reaction, and it is user-friendly because it can produce dilute hydrogen peroxide with the desired concentration on demand. "In the next step, we will develop electrocatalysts suitable for other electrolyte solutions to further increase the range of its applications," said UC San Diego chemical engineering graduate student Qiaowan Chang.

The key to making this reaction happen is a special catalyst that the team developed. It is made up of carbon nanotubes that have been partially oxidized, meaning oxygen atoms have been attached to the surface. The oxygen atoms are bound to tiny clusters of three to four palladium atoms. These bonds between the palladium clusters and oxygen atoms are what enable the reaction to occur with a high selectivity and activity due to its optimal binding energy of the key intermediate during the reaction.

Columbia University chemical engineering professor Jingguang Chen said, "The coordination between oxygen-modified Pd cluster and the oxygen-containing functional groups on carbon nanotubes is the key to enhancing its catalytic performance."

The team originally developed this method to make battery recycling processes greener. Hydrogen peroxide is one of the chemicals used to extract and recover metals like copper, nickel, cobalt and magnesium from used lithium-ion batteries. Similarly, it also makes the activation of hydrocarbon molecules more efficient, which is a critical step in many industrial chemical processes.

"We had been working on this project for about one and a half years. As we were wrapping things up, the COVID-19 pandemic hit," Chen said. Seeing news reports about the use of hydrogen peroxide vapor to disinfect N95 masks for reuse motivated the team to pivot directions.

"We saw that there was a more pressing need for efforts to help healthcare workers who may not have sufficient protection while caring for patients suffering from the new coronavirus," he said.

The work is at the proof-of-concept stage. Moving forward, the team will work on optimizing and scaling up the method for potential use in hospitals. Future studies include modifying the method so that it can be done using a neutral electrolyte (basically a salt solution) instead of an acidic one, which would be better for household and clinical applications, Chen said. Part of this continuing work is currently supported by UC San Diego's Sustainable Power and Energy Center.

This work was supported in part by the ACS Petroleum Research Fund (59989-DNI5), the U.S. Department of Energy (DE-FG02-13ER16381) and the UC San Diego Jacobs School of Engineering.