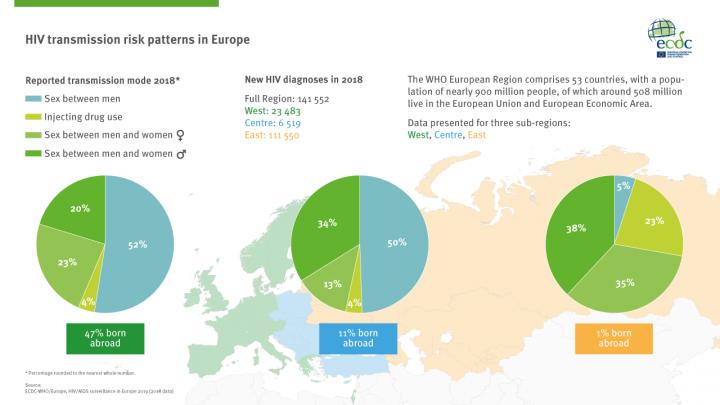 Two-thirds (60%) of the HIV diagnoses among women in 2018 reported in the age group 30 to 49 year-olds. This is in contrast to other sexually transmitted infections such as chlamydia and gonorrhea which mainly affect younger women aged 15 to 24 as described in an article published in Eurosurveillance today. Courtesy of ECDC

Many women in the World Health Organization (WHO) European Region, particularly those in their 40s, are diagnosed at a late stage of HIV infection when their immune system is already starting to fail. They are three to four times more likely to be diagnosed late than younger women.

According to data for 2018 released today by the European Centre for Disease Prevention and Control (ECDC) and the WHO Regional Office for Europe, women accounted for one-third of the 141,000 new HIV diagnoses in the Region, indicating that this population needs more attention in Europe's prevention and testing efforts.

The HIV epidemic in the Region is driven by a persistent problem with late diagnosis, and this affects 54% of known cases among women. Such proportions of late diagnoses are partly a result of relatively low HIV testing coverage and uptake in the Region, and are an indication that sexual risks, including HIV and other sexually transmitted infections, are not being adequately addressed with older adults.

Two-thirds (60%) of the HIV diagnoses among women in 2018 were in the age group 30-49 years old. Heterosexual sex was the most commonly reported HIV transmission mode (92%) among women in the Region.

Vytenis Andriukaitis, the European Commissioner for Health and Food Safety says, "Too many people living with HIV are still not aware of their status. The sooner women and men know of their HIV status, the sooner they can be put on antiretroviral treatment and halt transmission of HIV sexually. This makes a major difference in the lives of people living with HIV and those around them. It is all the more important, therefore, for public health services to support easy access to testing and fast linkage to care, especially for those at risk of HIV, in order to bring people faster to the stage where they are no longer infectious. We must all ramp up our efforts to halt and reverse the HIV epidemic in order to achieve our Sustainable Development Goals by 2030."

ECDC director Dr. Andrea Ammon stresses that, "Women are generally diagnosed with HIV later than men and the older they are, the longer they live with undiagnosed HIV. We do not know why but it seems current systems and testing efforts in Europe are failing women and older adults". "One strategy to reach older adults is to diversify and complement HIV testing opportunities. One of the most significant factors that influences testing patterns among older adults is quite simple: actively offer an HIV test as a health service provider."

Dr. Piroska Östlin, WHO regional director for Europe ad interim said, "Late diagnosis in women indicates that gender-sensitive counselling and testing, including information about sexual health, is not reaching this population. It's time to end the silence about sexual health, especially when it comes to HIV, and ensure that women are well informed and enabled to protect themselves. If we are to achieve universal health coverage, we need to improve prevention, treatment and care for women and reduce missed opportunities for testing those vulnerable to HIV in health facilities and in the community."

Early diagnosis of HIV allows people to start HIV treatment sooner, which in turn increases their chances of living a long and healthy life. In addition, it reduces the risk of transmitting HIV to others, since effective treatment results in an undetectable viral load, meaning that the virus can no longer be transmitted to others.

Enhanced strategies and systems, making HIV testing more widely available and user-friendly, are required to ensure early diagnoses. The WHO consolidated guidelines on HIV self-testing and partner notification and ECDC's evidence-based guidance on integrated testing for HIV and viral hepatitis recommend innovative approaches that include self-testing and community-based testing by lay providers as part of overall HIV testing services.

- increasing awareness among women and health-care providers;
- offering counselling and testing services adapted to the needs of women;

- notifying partners of men who are diagnosed with HIV;

- providing HIV testing based on specific health conditions, such as other sexually transmitted infections, viral hepatitis, tuberculosis or certain cancers;

- providing testing and treatment services in the community, closer to populations in need