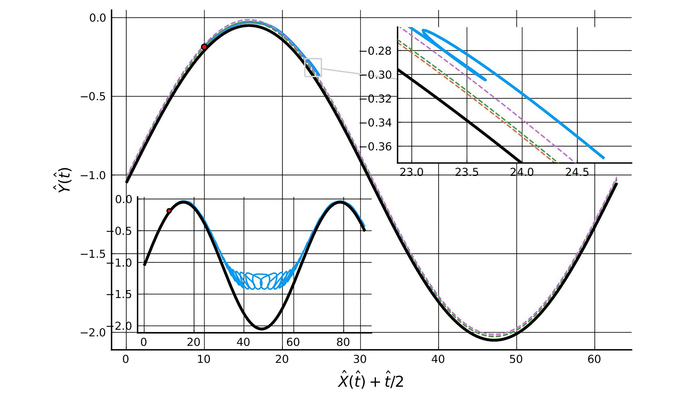 One case of a particle's movement. It begins as the red point, resting on the surface of the hand (black wavy line). It follows the blue path, escaping the hand and then moving freely through the hand-washing fluid. Courtesy of Paul Hammond

Although handwashing is proven effective in combating the spread of disease and infection, the physics behind it has rarely been studied. But in Physics of Fluids, researchers from Hammond Consulting Limited describe a simple model that captures the key mechanics of handwashing.

By simulating handwashing, they estimated the time scales on which particles, like viruses and bacteria, were removed from hands.

The mathematical model acts in two dimensions, with one wavy surface moving past another wavy surface, and a thin film of liquid between the two. Wavy surfaces represent hands because they are rough on small spatial scales.

Particles are trapped on the rough surfaces of the hand in potential wells. In other words, they are at the bottom of a valley, and in order for them to escape, the energy from the water flow must be high enough to get them up and out of the valley.

The strength of the flowing liquid depends on the speed of the moving hands. A stronger flow removes particles more easily.

"Basically, the flow tells you about the forces on the particles," said author Paul Hammond. "Then you can work out how the particles move and figure out if they get removed."

He likens the process to scrubbing a stain on a shirt: the faster the motion, the more likely it is to come out.

"If you move your hands too gently, too slowly, relative to one another, the forces created by the flowing fluid are not big enough to overcome the force holding the particle down," said Hammond.

Even when particles are removed, that process is not fast. Typical handwashing guidelines, like those from the Centers for Disease Control and Prevention, suggest at least 20 seconds under the faucet.

Results from Hammond's model agree. It takes about 20 seconds of vigorous movement to dislodge potential viruses and bacteria.

The model does not consider chemical or biological processes that occur when using soap. However, knowing the mechanisms that physically remove particles from hands may provide clues to formulating more effective, environmentally friendly soaps.

"Nowadays, we need to be a bit more thoughtful about what happens to the wash chemicals when they go down the plughole and enter the environment," said Hammond.

Hammond said this is not the whole story of handwashing, but it does answer important questions and lay the foundation for future research.