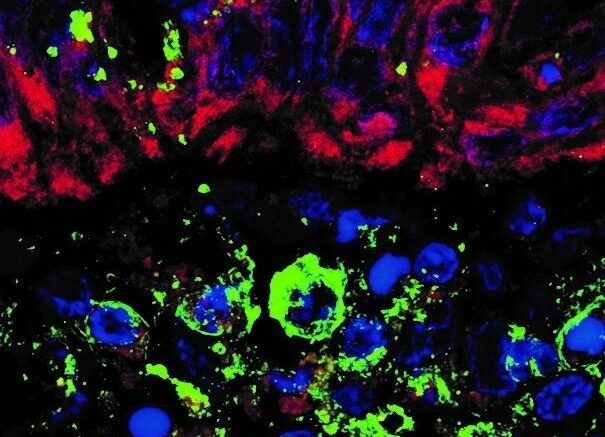 A study conducted at the University of Campinas (UNICAMP) in the state of São Paulo, Brazil, shows that compounds produced by gut microbiota (bacteria and other microorganisms) during fermentation of insoluble fiber from dietary plant matter do not affect the ability of the novel coronavirus SARS-CoV-2 to enter and replicate in cells lining the intestines. However, while in vitro treatment of cells with these molecules did not significantly influence local tissue infection, it reduced the expression of a gene that plays a key role in viral cell entry and a cytokine receptor that favors inflammation.

An article reporting the findings is published in the journal Gut Microbes.

Up to 50% of COVID-19 patients experience gastrointestinal symptoms such as diarrhea, vomiting, and abdominal pain. Such symptoms are detected in 17.6% of severe cases. They are partly associated with viral entry into intestinal cells resulting in alterations to their normal functions. In addition, recent studies point to major changes in patients’ gut microbiota, including a decrease in levels of bacteria that secrete short-chain fatty acids (SCFAs) by fermenting dietary fiber. SCFAs are important to colon health and maintenance of intestinal barrier integrity.

The researchers decided to confirm whether SFCAs directly affected the infection of intestinal cells by SARS-CoV-2. Previous studies had suggested alterations in gut microbiota and its products could modify an infected subject’s immune response.

“In earlier research, we found in animals that compounds produced by gut microbiota help protect the organism against respiratory infection. The model used there was respiratory syncytial virus [RSV], which causes bronchiolitis [inflammation of the small airways in the lung] and frequently infects children. Similar results have been obtained by other research groups in studies of different respiratory diseases,” said Patrícia Brito Rodrigues, who has a doctoral scholarship from FAPESP and is joint first author of the article with postdoctoral fellow Livia Bitencourt Pascoal. Rodrigues conducted the research as part of her doctorate at UNICAMP’s Institute of Biology (IB) with a scholarship from FAPESP.

In the latest study, healthy colon tissue and epithelial cells were infected with SARS-CoV-2 in the laboratory and subjected to a battery of tests.

“Viral load wasn’t reduced and was the same in cells and tissue treated with SCFAs and in untreated samples. However, treated intestinal biopsy samples displayed a significant decrease in expression of the gene DDX58 [an innate immune system receptor that detects viral nucleic acids and activates a signaling cascade that results in production of pro-inflammatory cytokines] and the interferon-lambda receptor, which mediates anti-viral activity. There was also a decrease in expression of the protein TMPRSS2, which is important to viral cell entry,” said Raquel Franco Leal, a professor at UNICAMP’s School of Medical Sciences (FCM), supported by FAPESP and co-principal investigator for the study with Marco Aurélio Ramirez Vinolo, a professor at IB-UNICAMP, also supported by FAPESP.

The researchers took colon tissue samples from 11 patients without COVID-19. They also tested epithelial cells that line the intestines and are in close contact with gut microbiota. Tissue and cell samples were infected with SARS-CoV-2 in IB-UNICAMP’s Laboratory of Emerging Virus Studies (LEVE), a Biosafety Level III (BSL-3) facility led by José Luiz Proença Módena, a professor at IB-UNICAMP and a co-author of the article.

The tissues and cells were treated with a mixture of acetate, propionate and butyrate, compounds produced by gut microbiota metabolization of SCFAs present in dietary fiber. The treatment did not alter viral load in colon biopsies or cells, nor were there any changes in cell wall permeability and integrity.

“That doesn’t exclude the possibility of significant action by SCFAs on infection by SARS-CoV-2. The anti-viral effects could depend on interaction with other cells in the organism,” Rodrigues said. “We’ll continue our investigation in animal models since the action of these compounds on the infection could depend on a more complete system than the samples we used in vitro [isolated cells and tissues].”

Other tests involving non-treated infected biopsy samples showed an increase in expression of the gene DDX58, which encodes an important viral receptor, and of interferon-beta (IFN-beta), a pro-inflammatory molecule that participates in the cytokine storm associated with severe cases of COVID-19.

“Alterations in genes associated with virus recognition and response during intestinal infection may be relevant to the onset of the inflammatory chain,” Leal said. “In this context, it will be important to deepen the analysis of the effects of SCFAs with these parameters, as this could be significant in severe stages of the disease.”