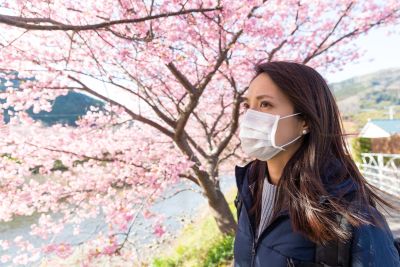 The study, including data from 130 sites in 31 countries and across five continents, is in the journal Proceedings of the National Academy of Sciences. It included data on SARS-CoV-2 infection rates, airborne pollen, humidity and temperatures and considered lockdown scenarios.

“Our results reveal that the simultaneous exposure to SARS-CoV-2 (via other infected human carriers) and airborne pollen may, under ‘favorable’ weather conditions, promote viral infection,” the study says. “In the light of the present pandemic situation, our findings should be communicated with caution so as to avoid misunderstandings and panic.”

The research suggests that pollen could add an extra 10 percent to 30 percent to the SARS-CoV-2 infection rate. There is no evidence that airborne pollen grains carry virus particles.

The study found that pollen, sometimes in synergy with humidity and temperature, explained 44 percent of the variability in infection rates, on average. SARS-CoV-2 infection rates increased after higher pollen concentrations most often during the four previous days.

Without a lockdown, an increase of 100 pollen grains per cubic meter of air led to a 4 percent average increase in infection rates, the study says. A lockdown halved infection rates under similar pollen concentrations.

Bielory, a physician, allergist and immunologist, is affiliated with the Rutgers Center for Environmental Prediction in the School of Environmental and Biological Sciences.