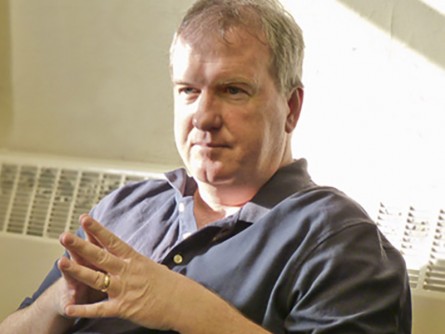 George Dehner might take exception to those who say the COVID-19 pandemic is unprecedented.

“This pattern of the appearance of a novel infection that spreads pandemics is as old as a human story. Once we began to settle in the towns and be connected to larger groups of populations that can sustain this sort of rapid infection element like a virus or some other thing, you have pandemics,” said Dehner, associate professor of history at Wichita State University.

Nor would Dehner say that the pandemic was entirely unexpected.

“COVID-19 itself was not predicted, but something like COVID-19 has been predicted for 25 years. COVID-19 is not a surprise to people who have been doing this sort of modeling” he said. “You can't pick which one it will be, but the fact that some sort of animal disease leapt into the human population and spread globally would not come as a surprise to anybody who does that sort of research.”

Dehner, a world environmental historian who examines the intersection of humans and disease in the modern era, presented “Influenza pandemics since Russian Flu: Do they provide insight to COVID-19?” on April 22 as part of a Fairmont College of Liberal Arts and Sciences series, Perspective on the Pandemic.

During his presentation, Dehner focused on the Russian flu of 1889, Spanish flu of 1918, Asian flu of 1957, Hong Kong flu in 1968, and the H1N1 virus of 2009 as compared to today’s COVID-19. He spoke about the role of transportation and centralized federal responses.

“Spanish flu is probably the best one to compare because COVID-19 and Spanish flu share some similar attributes.” However, he cautions that “all of this discussion with COVID-19 has to be taken with a grain of salt because a lot of the information is still coming in.”

During the discussion, Dehner shows graphs of the social distancing responses employed by particular cities during the 1918 pandemic.

“Spanish flu has been used as an example for examining what we call social distancing. You have an example of a successful early case in St. Louis,” Dehner said. “You can also see in St. Louis that while they flatten the curve on the front half, they remove those restrictions, and then we had a second peak. Here’s when social distancing worked, and here's what happened when you removed it.”

Though the terms social distancing, social bubbles and the 6-foot rule have become ubiquitous in our daily conversations, there’s historical precedence to their efficacy.

“What we're doing at the moment in terms of social distancing — because it's really the tool we have at hand that's most effective — that's certainly based upon the experience of events before. We also have lessons that exist in the past, particularly Spanish flu, when social distancing ends. There’s an enormous amount of pressure for ending social distancing because of the economic impacts, but that's also comparable to Spanish flu that was the same issue,” Dehner said.

But there are also key differences between COVID-19 and the Spanish flu of 1918.

“Number one, they’re completely different organisms, so we have to be cautious about saying ‘Let's plug in COVID-19 for Spanish flu,’ because they are completely different organisms,” Dehner said. “We have differences today where we know a lot more about COVID-19 than they ever knew about Spanish flu in 1918. With that is the possibility of creating either medical intervention treatments that will be effective and ultimately a vaccine. These are things that exist today that are different that didn't exist for Spanish flu. In Spanish flu, they didn't really understand that it was a virus. They were looking for a bacterial cause.”

Historical perspective on the pandemic

Dehner said that the mortality rate for COVID-19 is settling in at about 1%, which means that 99% of people recover from it. However, because it’s so infectious, Dehner said, there are a lot of people who are going to contract it.

“This is something that in a couple of years, we will probably have a protective vaccine, and we’ll be much better able to handle it,” he said. “I don't have the same fear that I would have or something that has a 2.5% mortality rate like Spanish flu does or when you start talking about SARS, which had somewhere around 17%, or you look at MERS that had about a 30% rate. You look at avian becoming human transmissible, you were looking at 40 to 50% mortality based upon a very small number of cases because you're only seeing people in the hospital. Those numbers I found much more frightening, but I don't want to a soft petal COVID-19 because 1% is still a very high mortality rate.”

As a historian, Dehner sees almost an instructional manual on how to deal with pandemic crises.

“We have a record of dealing with pandemics. Understanding how we have responded in the past, both at the local level in terms of the university and the town but also at the federal level, one thing I think future historians are going to look at very minutely is why our particular response during this time has taken the path it has,” he said. “It hasn't followed what had been templates before. As a historian, I would like to argue that understanding the impact of pandemics in the past is something that we can usefully consider as we examine what to do today.”