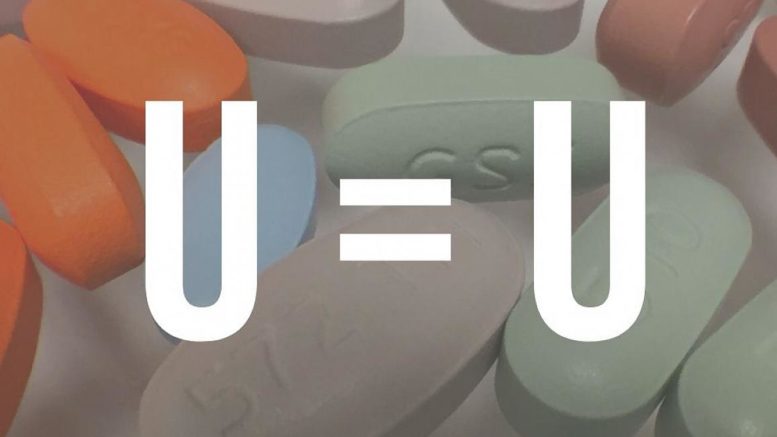 Extensive evidence from HIV prevention research studies has firmly established that “Undetectable Equals Untransmittable,” or U=U. This means that people living with HIV who achieve and maintain an undetectable viral load — the amount of virus in their blood — by taking antiretroviral therapy (ART) as prescribed do not sexually transmit HIV to others. The Centers for Disease Control and Prevention (CDC) estimates this strategy is 100 percent effective against the sexual transmission of HIV.

Now, a new study of nearly 112,000 men who have sex with men in the United States has found increasing acceptance of the U=U message in this population. Overall, 54% of HIV-negative participants and 84% of participants with HIV correctly identified U=U as accurate. The study was supported by the National Institute of Allergy and Infectious Diseases (NIAID), part of the National Institutes of Health. Study results were published online today in the Journal of Acquired Immune Deficiency Syndromes.

“U=U has been validated repeatedly by numerous studies as a safe and effective means of preventing the sexual transmission of HIV,” said Anthony S. Fauci, MD, NIAID director. “The increased understanding and acceptance of U=U is encouraging because HIV treatment as prevention is a foundation of efforts to end the epidemic in the United States and around the world. This public health message has the power to reduce stigma, protect the health of people living with HIV and prevent sexual transmission of HIV to others.”

Researchers led by H. Jonathon Rendina, PhD., MPH, at Hunter College of the City University of New York, collected data from secure online surveys promoted on social media and mobile dating apps from November 2017 through September 2018. By analyzing the responses of self-identified sexual minority men, researchers found that approximately 55 percent of participants responded “completely accurate” or “somewhat accurate” to the question: “With regard to HIV-positive individuals transmitting HIV through sexual contact, how accurate do you believe the slogan Undetectable = Untransmittable is?”

Acceptance of U=U was far stronger among participants who self-reported to be living with HIV (84 percent) compared to HIV-negative participants (54 percent) and those who did not know their HIV status (39 percent). Researchers found U=U acceptance had increased over time by comparing the data to findings from a similar study by the same group that analyzed data collected in 2016 and early 2017. Among the 12,200 sexual minority men surveyed at that time, only 30 percent of HIV-negative participants and 64 percent of participants living with HIV agreed that U=U was completely or somewhat accurate.

In the current study, HIV-negative participants who reported seeking HIV testing and prevention services, as well as those taking daily pre-exposure prophylaxis (PrEP), were more likely to believe U=U was accurate. These findings suggest that U=U acceptance correlates to more frequent interactions with HIV prevention services. Among respondents with HIV, those who reported excellent adherence to ART were more likely to agree that U=U is accurate compared to those who reported “less than excellent” adherence or not being on ART at all.

The online survey also asked respondents to use a graduated scale from 0 percent (“no risk”) to 100 percent (“complete risk”) to rate the risk of a man whose HIV was undetectable transmitting the virus to his HIV-negative partner through either insertive or receptive anal sex without a condom. While studies confirm that a person whose HIV is suppressed does not transmit the virus through sexual activity, only 10% of all respondents rated the transmission risk as zero when the insertive partner has undetectable virus. Similarly, only 14 percent of respondents rated transmission risk as zero when HIV in the receptive partner is undetectable.

“A growing number of sexual minority men believe that U=U is accurate, but our data suggest that most still overestimate the risk of HIV transmission from an undetectable partner, which may be because people have trouble understanding the concept of risk,” said Rendina, the lead author on the study. “All published studies point to undetectable viral load as being the most effective method to date of preventing sexual HIV transmission, but most of our messaging has focused on the level of risk being zero rather than describing it in terms of effectiveness, which is the way we usually talk about condoms and PrEP.”

All data collected in the online survey was confidential and self-reported. Study participants represented all U.S. states and were of various races and ethnicities, including 14 percent Black and 24 percent Latino. Participants ranged in age from 13 to 88 years old with a median age of 32. About 79 percent identified as gay, 18 percent as bisexual, and 3 percent as queer. Approximately 1 percent of respondents identified as transgender.

Earlier this year, Fauci and his colleagues wrote about the strength of scientific validation for the HIV treatment as prevention strategy and U=U in a JAMA commentary. The efficacy of treatment as prevention was first verified on a large scale by the NIH-funded HPTN 052 clinical trial, which showed that no linked HIV transmissions occurred among serodifferent heterosexual couples when the partner living with HIV had a durably suppressed viral load. Subsequently, the PARTNER 1 and 2 and Opposites Attract studies confirmed these findings and extended them to male-male couples. As described by authors of the current study, the independent non-profit organization Prevention Access Campaign launched the U=U slogan in 2016 to promote awareness of these scientific findings.

Be the first to comment on "HIV Transmission-risk Misunderstandings Persist, Study Finds"