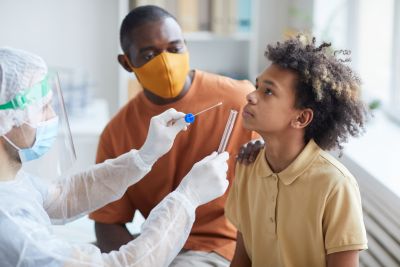 Mailing a package of SARS-CoV-2 tests to every household in America and asking people to use them once a week could greatly reduce total infections and mortality at a justifiable cost, a new study led by the Yale School of Public Health finds.

The research, published today in Annals of Internal Medicine, considers rapid antigen tests that warn people, in real-time, that they are potentially contagious and that they should isolate themselves before unknowingly spreading the disease to others. Investigators, led by professor A. David Paltiel, assembled data on the epidemiology of SARS-CoV-2 and the natural history of COVID-19. They then used a mathematical model to estimate how many infections, hospitalizations, and deaths could be averted -- and at what cost -- by providing households with the technology to self-identify and self-isolate before they infect others.

"Home-based antigen testing for SARS-CoV-2 combined with self-enforced isolation for those who have a positive result hasn't received the attention it deserves as a complement to social distancing and vaccination for containing the pandemic," said Paltiel.

"We went to elaborate lengths to address these concerns, leaning heavily on the scales to tip the analysis against our own findings and deliberately portraying the strategy in a highly unfavorable light," said study co-author Paul D. Sax, of Brigham and Women's Hospital and Harvard Medical School.

For example, the investigators assumed that as many as 75% of households would elect to discard the package without opening it, that as many as 75% of the people would ignore a positive result, and that fewer than 25% of persons who elected to self-isolate would do so for a full week, as recommended. "We made equally pessimistic assumptions about the costs and accuracy of the tests. And still we found that it would confer an outstanding value," Sax said.

The study found that over a 60-days period, weekly availability of testing would avert 2.8 million infections and 15,700 deaths in the United States at an incremental cost of roughly $68 per person. This figure includes $38 for testing, $32 in additional workday productivity losses, and savings of $2 in inpatient hospitalization. This works out to a cost-effectiveness ratio of $1.43 million per death averted.

The investigators also noted that no single intervention will be sufficient to contain the pandemic, adding that their analysis highlights the importance of high-frequency testing as a complement to social distancing, vaccination, and other mitigation strategies.

"Don't let the perfect be the enemy of the good," said Paltiel. "Home-based antigen testing could save millions of infections and thousands of lives at a reasonable cost."

Be the first to comment on "Home Testing for COVID-19 Could Prevent Infections, Reduce Deaths at Justifiable Cost"