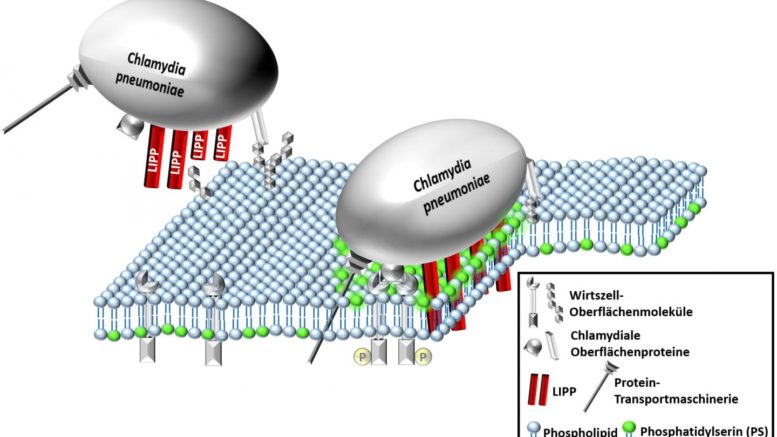 A Chlamydia pneumoniae cell uses its surface protein LIPP (red) to bind to the outside of a human cell. The LIPP protein permeates the cell membrane and transports the cell's own phospholipid PS (green) from the interior to the exterior. Localisation of the PS molecule on the outer membrane leaflet helps the Chlamydium to enter the viable human cell. In the event of chlamydial infection, the PS on the outer membrane thus fulfils a different function than in dying human cells. Courtesy of HHU/Jan Galle

Chlamydia are bacteria that can infect human and animal cells. Human health is particularly affected by Chlamydia pneumoniae (Cpn) and Chlamydia trachomatis. Chlamydia pneumoniae attacks the upper and lower respiratory tract and causes bronchitis, sinusitis and chest infections. Importantly, infections with this bacterium are associated with many chronic diseases such as chronic bronchitis, asthma, atherosclerosis and Alzheimer's disease.

Chlamydia multiply only inside of human cells. To do so, they first have to bind to the host cell from the outside and then enter the cell in a second step. Understanding these two mechanisms is one of the key research areas at the Institute of Functional Genome Research of Microorganisms headed up by Dr. Johannes Hegemann.

Each cell is surrounded by a membrane known as the 'plasma membrane.' This membrane comprises lots of individual molecules called 'phospholipids.' There are also membrane proteins, which are responsible for transporting materials between the cell interior and the outer environment as well as for intercellular communication. One component of the membrane is the phospholipid phosphatidylserine, or 'PS' for short. In healthy cells, it is located on the inner membrane leaflet, but if the cell is diseased, it is transported to the external membrane leaflet. Here, PS serves as a marker for programmed cell death (apoptosis).

In the working group of Hegemann, a protein called LIPP was discovered in Cpn that plays a key role in the binding of the bacterium to a human cell. This protein is located on the surface of the bacterium. In earlier studies, the researchers in Düsseldorf found that a chlamydial infection with Cpn is increased substantially if LIPP is added artificially.

This finding was the start of the present study.

Next, however, the bound LIPP transports the PS molecule, normally located on the inner membrane leaflet, to the outside. LIPP was the first protein to be identified that transports a component of the inner membrane leaflet to the surface of the cell when added externally. Surprisingly, this does not trigger cell death. Instead, the cell remains viable. This applies both to cells confronted only with the LIPP proteins and to those also infected with Chlamydia.

The research team proposes that it is beneficial for the Chlamydium to transport the PS molecule of the host cell outward using its LIPP protein. Possibly, at the place where the PS with the LIPP protein is located on the membrane, the membrane is so deformed that the Chlamydium can enter the cell more easily. It is also possible that the PS molecules transported to the outer membrane leaflet of the human cell serve as a receptor for the bacterium.

Dr. Jan Galle, first author of the study, had this to say about the prospects arising from these findings: "The LIPP protein has now become a possible target to prevent a chlamydial infection. If we succeed in coming up with a drug that restricts the function of the LIPP protein, it may be possible to prevent the infection."

Likewise it is now possible to examine whether other pathogens have a tool similar to Chlamydia that they use to enter human cells.

"If this were the case, it could form the basis for an extensive strategy against pathogenic bacteria," emphasizes Hegemann.