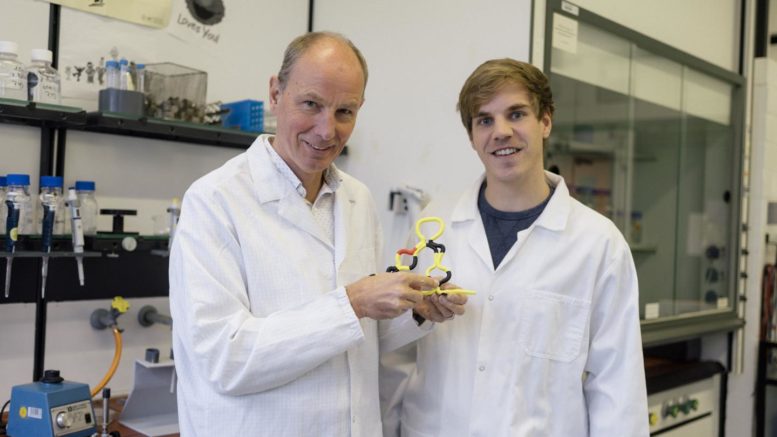 Christian Twittenhoff (right) and Franz Narberhaus have created a model that shows how the RNA thermometer melts. Courtesy of RUB, Kramer

Many bacterial pathogens excrete toxins as soon as they have entered the host in order to suppress its immune response. Researchers at Ruhr-Universität Bochum (RUB) have analyzed what happens on the molecular level when the diarrhea pathogen Yersinia pseudotuberculosis switches into attack mode. To this end, they examined so-called RNA thermometers, which signal to the bacteria whether they are in the host.

In collaboration with colleagues from the Helmholtz Institute for Infection Research in Braunschweig, they also showed that bacteria with deactivated RNA thermometers can no longer trigger an infection. The journal PLOS Pathogens reports about the study online on Jan. 17, 2020.

"We knew from previous studies that Yersinia bacteria are very sensitive to temperature changes and recognise that they are in their host on the basis of body temperature," says professor Franz Narberhaus from the RUB Chair of Microbial Biology. RNA thermometers are responsible for temperature measurement. They are sections in the messenger RNA of many genes that contain the blueprint for disease-causing proteins.

At low temperature, RNA thermometers prevent the RNA from being read and translated into proteins. Only after successful infection of the warm-blooded host (at a temperature of around 37 degrees Celsius) do the RNA structures melt. They can then be written into proteins that have a harmful effect on the host. In the current publication, the scientists describe the underlying melting mechanism of the RNA thermometer for one of the toxins of Yersinia pseudotuberculosis, namely the CnfY-Toxin.

PhD student Christian Twittenhoff from Bochum used isolated cell components of the diarrhea pathogen to show which structure the RNA thermometer for the CnfY toxin assumes and where it melts. The biologist created a model that documents how the thermometer opens. It also shows how the ribosome -- the cell component on which the messenger RNA is translated into a protein -- docks to the messenger RNA.

In cooperation with the group headed by professor Petra Dersch, formerly at Helmholtz Institute in Braunschweig, currently at the University of Münster, the researchers moreover demonstrated the role of the RNA thermometer in the disease process. They infected mice with Yersinia bacteria that either had functioning RNA thermometers or inactivated RNA thermometers that could not melt at 37 degrees Celsius. The bacterial strains with modified RNA thermometers were not able to make mice ill.

"The results have shown how important very short regulatory RNA sequences can be for the successful course of infection of a bacterium," concludes Twittenhoff, lead author of the study.

Twittenhoff compared the gene of the CnfY toxin with toxin genes of other pathogens using bioinformatic methods. The analysis suggests that other toxin genes might also be regulated by RNA thermometers. "Even though the sequences are very different, we are able to predict which RNA structures are likely to act as thermometers," he explains.

"RNA thermometers function via a very simple mechanism, which has probably proved its efficacy in the course of evolution and has therefore developed many times and independently of each other," says Narberhaus. In principle, it is possible to prevent bacterial infection by preventing the melting of such RNA structures. "However, we don't yet know any substances that freeze RNA thermometers in the closed state," continues Narberhaus.

The diarrhea pathogen Yersinia pseudotuberculosis is closely related to the plague pathogen Yersinia pestis. The bacterium is transmitted via contaminated food. As soon as it arrives in the intestine of the warm-blooded host, it secretes the so-called CnfY toxin, which triggers acute inflammatory reactions and increases the effect of other pathogenic substances.