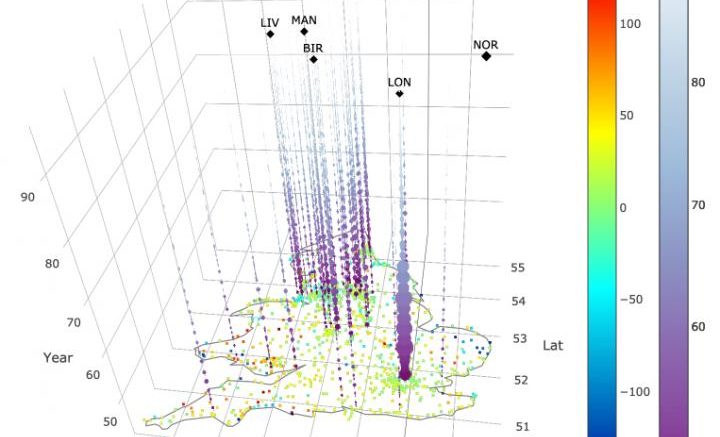 Illustration of the observed measles epidemics in cities and towns of Enland and Wales from 1944-94 (vertical Z-axis represents the timeline) for the largest locations. New research reveals that, prior to the introduction of the measles vaccine, transmission patterns were likely driven by periodic epidemics from both large population centers and the aggregation of small towns. Courtesy of Max S. Y. Lau

In the most detailed study to date of epidemic spread, an international team of researchers has modeled measles dynamics based on over 40 years of data collected in England and Wales. The models--which span the prevaccination period, introduction of measles vaccination, and local elimination by vaccination in the 1990s--reveal that, before the introduction of a vaccine, measles could persist in both large population centers and by spread among sets of smaller towns. The study also provides critical data on the importance of spatial modeling for the long-term control of global epidemics and could help inform the long-term public health response to the current COVID-19 pandemic.

A paper describing the study appears April 27, 2020 in the journal Nature Ecology & Evolution.

"During the last 20 years there have been tremendous inroads towards eradicating measles--one of the major killers of children globally--as annual deaths have been driven down from more than a million to less than 200,000," said Ottar N. Bjørnstad, professor of entomology and biology at Penn State and one of the leaders of the research team. "However, previous efforts to eradicate smallpox and polio highlight the complexity of moving from local control to global eradication. Our study provides critical data on how long-term control efforts will need both general and detailed spatial models to finally stop this deadly disease."

Prior to the introduction of a vaccine, the number of measles cases in England and Wales would undergo, periodic--often biennial--epidemics. This pattern, driven by herd immunity, is common among a number of diseases and in other locales. The researchers sought to locate the reservoirs where the virus persists in the dips between epidemics, which are the sources for reintroduction of the virus into the general populace in the next major epidemic. This persistence question is central to understanding the dynamics of measles and other viral diseases and for coordinating public health interventions.

The research team combined spatial modeling with the detailed historical data of measles cases in England and Wales to address these questions. The uniquely detailed data set includes weekly measles reports from almost a thousand locations across England and Wales beginning in 1944 and continuing until the disease was all but locally eliminated by vaccination in the 1990s.

"Previous work stressed the importance of large centers as sources of infection," said Bryan T. Grenfell, the Kathryn Briger and Sarah Fenton Professor of Ecology and Evolutionary Biology and of Public Affairs at Princeton University and another leader of the research team. "However, our new modeling shows that local spread among smaller towns can also contribute to persistence of the virus."

The researchers' new model quantifies the relative influence of different sources of infection, including major cities, spread among smaller towns, and unidentifiable outside sources. Following the introduction of vaccination, the source of reintroduction shifted from a combination of large centers and local spread to mainly unidentifiable sources, possibly outside of England and Wales.

"Having access to this unique data set allowed us to test these news models of measles dynamics with unprecedented rigor," said Max S. Y. Lau, assistant professor in the Rollins School of Public Health at Emory University and first author of the paper. "Going forward, we can apply what we learn from this test case to understand disease spread beyond measles."

"Measles has always been the 'model organism' of epidemic dynamics--like C. elegans or the fruit fly are for evolution--and, along with influenza, a paradigm for understanding herd immunity," said Grenfell. "So, as COVID-19 approaches endemicity, these new models can help us understand and prepare for modeling its spatial spread, as well as understand the impact that the eventual development of a vaccine might have on its dynamics."

Beyond the COVID-19 pandemic, the models also could help scientists understand how diseases survive and spread at a time when a portion of the public is opposed to vaccines, said co-author C. Jessica E. Metcalf, assistant professor of ecology and evolutionary biology and public affairs. "Understanding the drivers of persistence is also of growing importance in a context of growing vaccine hesitancy, which further complicates dynamics and amplifies the challenges of control," she said.

The researchers added that wide perspective should be taken when applying the results to other diseases.

"Our model and previous experience highlights the complexity of globally eradicating a virus," said Bjørnstad. "Smallpox was eradicated by 1977 through a massive global effort of mass-vaccination of all children, followed by targeted efforts in regional hotspots and finally local quarantining and ring vaccination to squash the scourge. Polio, in contrast, while also targeted through vaccination for more than 50 years keeps escaping 'the final blow' as it successfully shifts and diffuses across regional pockets of susceptible individuals to evade eradication."

In addition to Bjørnstad, Grenfell, Lau, and Metcalf, the research team included, from Princeton, Ph.D. candidates Alexander Becker in ecology and evolutionary biology and Hannah M. Korevaar in the Office of Population Research, and postdoctoral researcher Quentin Caudron; and Darren J. Shaw at the University of Edinburgh.

1 Comment on "How do Epidemics Spread and Persist Before and After Introduction of a Vaccine?"